Apple To Delve Into Solar-Powered Devices?

Apple recently posted a job announcement for a thin films engineer for its mobile devices division, making some people think that the mobile giant might be looking to develop some solar-powered devices.

Surely, if the price is right, extending the life of a person’s iPhone, iPad, or iPod Touch would be very positively received by consumers.

The job announcement specifically targeted people with “extensive experience with thin-film technologies in either semiconductor processing or solar industries” in order to “assist in the development and refinement of thin films technologies applicable to electronic systems.”

Furthermore, “knowledge of thin-films in the context of RF shielding is highly desirable,” the announcement (no longer posted on Apple’s website) stated.

Of course, Apple has already delved into solar power a bit in other ways. Here are a few stories about that:

“It’s the largest non-utility solar array we think anywhere in the US and it’s backed up by fuel cells which run on biogas.”

9To5Mac has more details on the job application and related patent requests: 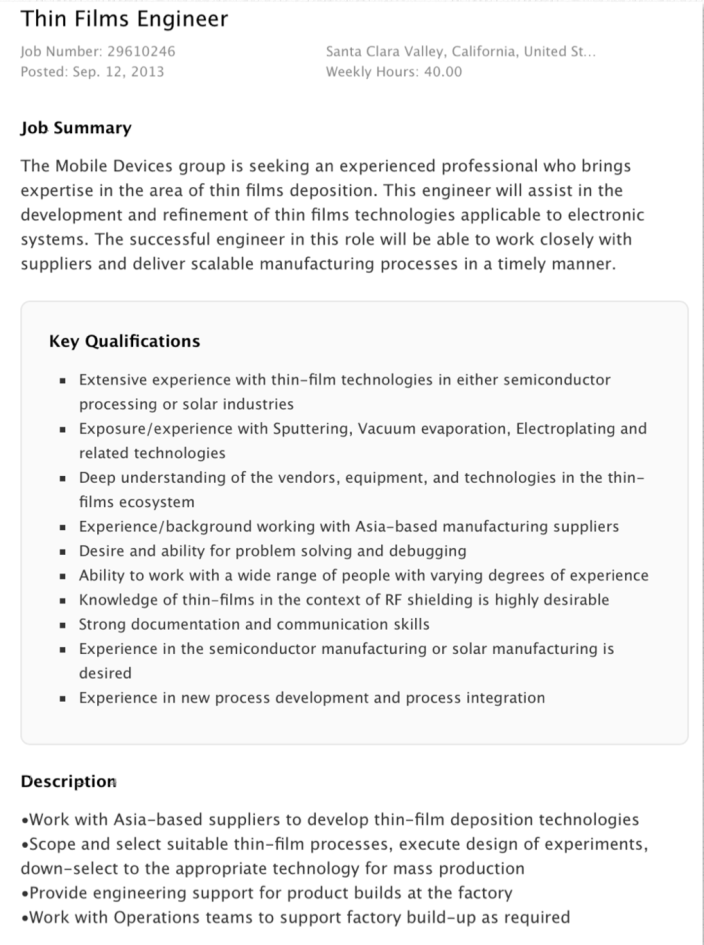 Back in 2011, new Apple patents surfaced related to solar applications for consumer products and just this year a patent application detailed a method of integrating a touch sensor and a solar assembly into the display of a mobile product like an iPhone.

Solar technology could also have major benefits for Apple’s watch product currently being developed by a team of Apple executives, sensor, and fitness experts. A patent application from Apple earlier this year showed a wrist watch form factor that could utilize a built-in solar array as an additional power source for the device’s battery. Charging and battery life has been a hurdle for current smart watches on the market that often require charging everyday, and smart watches with longer battery life are often much thicker than a traditional wristwatch as a result of a larger battery.

Companies are already testing similar applications to integrate solar technology into a smartphone display in order to extend battery life, although there has yet to be a large manufacturer to implement a solar panel into a flagship smartphone or tablet.

I’m sure it will happen someday. We’ll see how long it takes.