A group of Baltimore residents have banded together to form a solar energy co-op. The idea for the co-operative began with Retrofit Baltimore, a part of the nonprofit Civic Works that helps residents make their homes more energy efficient. Co-op members expect to save about 25% on their electric bills every month. 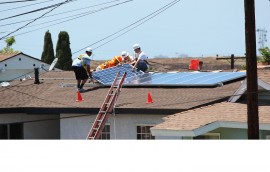 The main benefits of a co-op are that it allows multiple home owners negotiate the best possible price for system installations with a single contractor. It also simplifies and de-mystifies the rooftop solar process for residents who are interested in home solar but don’t know where to begin.

“That’s the big appeal for us,” says co-op member Mark Parker, a pastor at Breath of God Lutheran Church. “It’s exciting to get together with your neighbors. When we all go in together, it seems like we’re making more of a difference in making our environment more sustainable.”

About 25 other co-ops have been launched in the past two years across Maryland, Virginia, Washington and West Virginia, according to Corey Ramsden, the Maryland program director for the Community Power Network, a network of groups promoting renewable energy.

According to the Baltimore Sun, several green organizations and churches launched the Baltimore Interfaith Solar Co-op last year, drawing 90 residents from all across the metro area. That co-op is believed to be the first of its kind in the Baltimore area. About 25 other co-ops have been launched in the past two years across Maryland, Virginia, Washington and West Virginia, according to Ramsden.

Eli Allen, the director of Retrofit Baltimore, said the co-op has attracted about 65 members so far. Residents are welcome to join the co-op up until Earth Day on April 22. Members can save about 25%, driving the cost of a 3 kilowatt system, which is appropriate for a typical Baltimore row house, down to about $4,000 after various state and federal incentives.

Allen said the co-op organizers give homeowners a “step-by-step” explanation of the process. They even evaluated the roofs of potential co-op members. In some cases, they found some that would not work for solar panels because of the amount of shade or other factors. “When we kind of lay all that out for homeowners and make it easy, so many more people go solar,” Allen says. “Sometimes you need that trusted third-party voice. We cut through what may be the hype about solar and get into what the real value of the service is.”

One member of the co-op, Avis Ransom, says the co-op gave her additional motivation because of the cost savings from buying as a group. She also says there is another advantage of rooftop solar that most never even consider. She points out that using less energy at home has a multiplier effect because of the energy losses involved in transmitting power across great distances. “Energy efficiency is in effect a source of energy,” she says.

Rhone Resch, president and CEO of the Solar Energy Industries Association told the Sun, “The general public doesn’t have a lot of information about the electricity or the grid or some of the policy issues around solar. It does require a little more research than just picking up the phone and calling the solar company.”

Resch says one reason co-ops are so successful is, “Rather than hearing from a salesperson, you’re hearing from your neighbors or trusted community leaders.” He adds, “So many homes in Baltimore have flat roofs and are just baking in the sun and are just perfect for installing solar.”

Duke Energy To Add 500 MW Of Solar Power In Florida