This is a guest post from Mathias Aarre Maehlum, who writes more about solar panels at Energy Informative. Enjoy!

A team of researchers at the National Institute of Standards and Technology has made significant improvements to the process of generating hydrogen from solar energy and water.

They have created a PEC-cell (photoelectrochemical) that works in much the same way as a conventional photovoltaic cell, but rather then generating electricity it produces hydrogen gas. 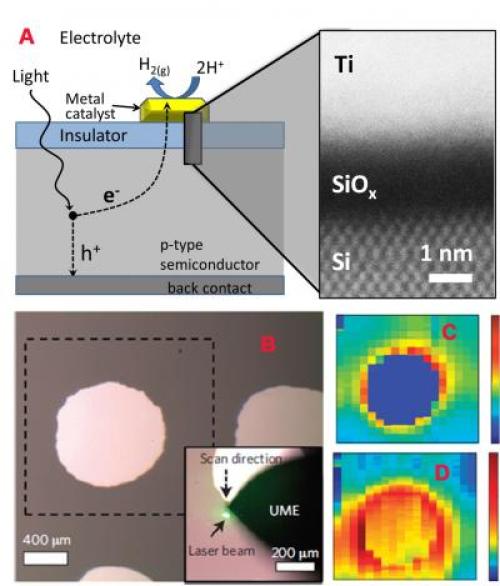 For full details on how the technology works, head on over to NIST. Credit: Esposito, Levin/NIST

A semiconducting photoelectrode converts photons (sunlight) into electrons. The electrons are then used to split water molecules (H2O) into two hydrogen atoms and one oxygen atom. The researchers at NIST have innovated the PEC-cell by using a metal-insulator-semiconductor (MIS), which improves on the stability issues that previous PEC prototypes have been struggling with. The research team hopes their new design will eventually lead to cost-effective hydrogen.

Hydrogen gas has many significant benefits as a fuel carrier. Maybe the most important one being that the process of releasing the power in each hydrogen atom does not involve any pollution (water and heat are the only byproducts). Hydrogen can also be used to help balancing out our increasingly fluctuating energy system (as more and more renewable energy is added to the electrical grid):

“A major challenge with solar energy is dealing with solar intermittency. We demand energy constantly, but the sun’s not always going to be shining, so there’s an important need to convert solar energy into a form we can use when the sun’s not out. For large-scale energy storage or transportation, hydrogen has a lot of benefits.” says NIST chemical engineer Daniel Esposito.

It is also worth mentioning that hydrogen has the highest energy content compared to any other fuel carrier that we use today.

However, producing hydrogen is incredibly expensive. Researchers have for many years been trying to find a cost-effective method or a process. Maybe the researchers at NIST are onto something with their solar-powered hydrogen process?