Lancaster, California, is located northeast of Los Angeles near Edwards Air Force Base. It lies at the edge of the Mojave Desert, where abundant sunshine is the order of the day. The city has been a leader in clean, renewable energy since 2011 and has been requiring builders to install solar panels on all new homes since 2014. Its policies have served as a model for other California communities, including Sebastopol, Santa Monica, and San Francisco. Now, the city seeks to raise the bar by requiring each new home to have a rooftop solar system large enough to meet its full energy needs. 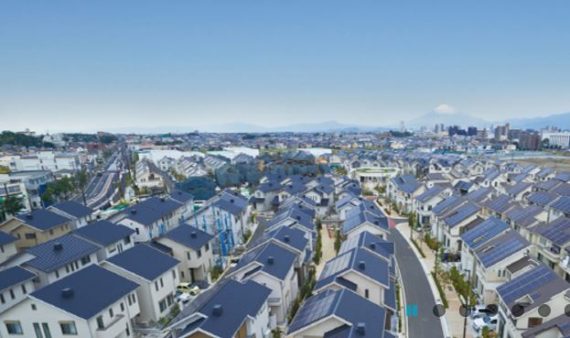 First, a disclaimer: The new requirement for rooftop solar is computed based on the square footage of the home. How much electricity each family actually consumes will vary widely. Couple A may have an in-ground pool, a hot tub, and two Teslas. Their energy usage will naturally be higher than Couple B, who have none of those things. Lancaster’s “Zero Net Energy” policy, passed last week, mandates that rooftop solar systems generate 2 watts per square foot of living space.

“The Zero Net Energy Home Ordinance expands upon Lancaster’s residential solar ordinance so that new homes built in Lancaster now will not only be environmentally friendly, but have a zero net impact on our environment, while reducing energy costs for the homeowners,” said Republican Mayor R. Rex Parris in a statement. “This is a great stride in Lancaster’s journey to become a Zero Net City.”

The implementation of the new rooftop solar policy must wait for a feasibility study to be concluded. That is expected to happen in April. Then, Lancaster will seek approval from the California Energy Commission. If everything goes smoothly, the rule will take effect before the close of 2017. One of the advantages for homeowners is that the cost of the solar system is included in the price of the home. That means the extra cost of the system only increases the monthly mortgage payment slightly. In addition, it eliminates the homeowner having a separate loan to pay in addition to the mortgage each month.

An analogy could be made to a heating and air conditioning equipment. Adding those items into the purchase price of the home just makes sense. Also, contractors are accustomed to dealing with suppliers and subcontractors. Letting professionals deal with those details rather than making individual homeowners research the best combination of equipment, warranty, and price is only sensible.

The new policy is in line with legislation filed just last week in the California legislature that would mandate 50% of the electricity used in the state come from renewable sources by 2025 and 100% by 2045. The Lancaster policy may serve as a model for other communities in the state as they devise ways to meet those goals.

By the way, Lancaster is also where BYD builds its electric buses for the USA.

California Legislation Would Double Down On Renewable Energy Goal

Solar Power Coming To 10,000 Nigerian Homes Thanks To Microgrids