A report from the Georgia Institute of Technology (Georgia Tech) says that states can reduce their greenhouse gas emissions by using a combination of renewable energy sources and energy saving strategies. It says those changes are affordable if done properly.

Marilyn Brown, the project’s lead researcher and the Brook Byers Professor of Sustainable Systems in the School of Public Policy at Georgia Tech tells Think Progress, “To minimize costs, the country needs to reduce its coal consumption more rapidly, continue to expand its gas-fired power plants, but temper this growth with aggressive policies to increase energy efficiency and renewable energy.”

Complying with the Clean Power Plan would also produce substantial collateral benefits such as lower electricity bills, greater GDP growth, and significant reductions in SO2, NOx, and mercury emissions. “The strong push on energy efficiency also enables GDP to rise above the business-as-usual forecast,” said Brown. “The US increases its exports and decreases its imports as a result of being more competitive.”

Another recent report by energy research firm Synapse Energy Economics finds that average energy bills in 2030 could be $35 per month lower under a “Clean Energy Future” scenario than they would be if the Clean Power Plan is not put into operation.

Both reports run counter to claims by utility advocates that the Clean Power Plan will cause electric bills to skyrocket. Fear mongering is a frequent tactic among so-called “think tanks” who think about what their powerful and well-heeled benefactors tell them to think about. In most cases, their conclusions are written before their studies even begin.

“As energy is used more efficiently, non-competitive power plants can be retired, construction of new coal plants can be deferred, and transmission and distribution infrastructure investments can be delayed, all of which would lower rates and therefore lower the energy bills of all consumers,” Marilyn Brown said. “This is a counter-intuitive finding to some who keep hearing from critics that have claimed that it will significantly increase the electricity bills of American families.”

For modeling purposes, the study’s researchers did detailed solar cost analysis and determined that, by 2030, installed costs of solar would be approximately $1.75/watt for utility-scale PV, $2/watt for commercial-scale PV, and $2.50/watt for residential-scale PV in 2010 dollars. 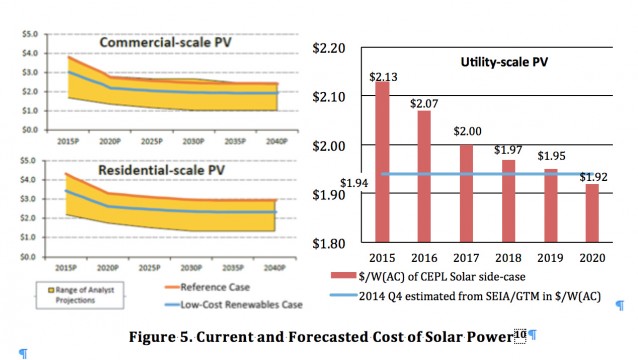 Other recent studies show that, although residential solar may cost more to install, its total cost is competitive with utility-scale installations because it eliminates fixed costs for building long-distance transmission lines, utility substations, and grid infrastructure. It also eliminates the significant line losses that plague electricity sent over long distances.

The Georgia Tech report concludes with this statement: “Energy efficiency programs and policies need to be revved up, along with monitoring and verification schemes and energy bench marking. States need to prepare for a future where solar energy plays a much stronger role, both rooftop systems and solar farms, with a wide array of different financing and ownership schemes.”

On July 25, Germany Got 78% Of Its Electricity From Renewables