New figures released Monday by Wiki-Solar have pegged global utility-scale solar PV capacity at 45 gigawatts at the halfway mark of 2015.

According to the self-proclaimed utility-solar authority, there were 8 gigawatts (GW) of new solar PV plants in the first half of 2015, which could set a new annual record if things continue along this track.

Unsurprisingly, the global spread of newly commissioned solar PV capacity is quite evenly distributed across the leading three regions — Asia, Europe, and North America. However, Wiki-Solar.org also notes that the remaining three regions it monitors — Australasia & Oceania, Africa, and South America — are beginning to feature within the global world totals.

New capacity of utility-scale solar projects by continent and year 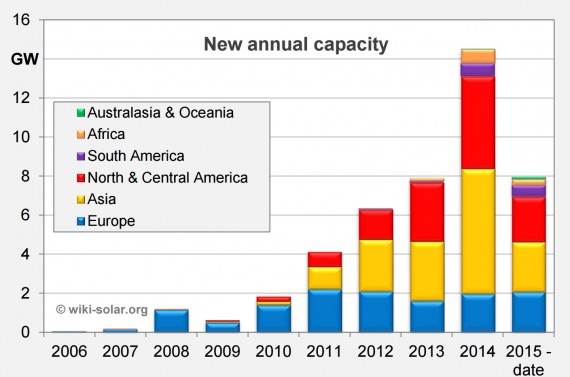 Another completely unsurprising turn of events is China’s continued growth, now exceeding 10 GW in cumulative solar PV capacity. China may in fact have taken the top spot away from the US, said Wiki-Solar, adding that “the capacity shown … is probably understated, as new installations often take some months to be reported.”

The UK did make a surprising move, however, jumping into the third spot over Germany, having installed 2 GW of new solar PV capacity in the first quarter of 2015.

Cumulative operating capacity across the 6 regions therefore looks like this: 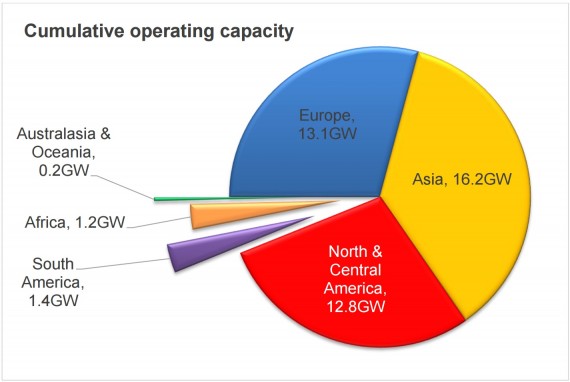 Note: Wiki-Solar’s database covers over 4,500 utility-scale solar projects, of which about two-thirds are operational, and the remainder are under construction or development.

The Solar Revolution Is Starting (Video)