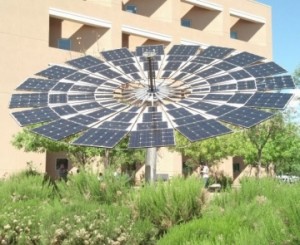 Monarch Power is an interesting company that wasn’t on my map until today. It has produced some very interesting solar flowers, or “Lotus Mobile” units. As you can see via the images on this page, the solar panels in this units fold out like petals on a flower, and then they can fold up again for easy transport/relocation. I’m not sure how security works with these, but I assume something is built in or recommended to make sure they stay in place when that is desired.

The attractive design of these units is certainly a plus — people already pay a good deal for art; why not combine that with utility and green electricity?

How much do people buy products (sometimes for quite a premium) simply because it’s cool? Why not a solar flower? 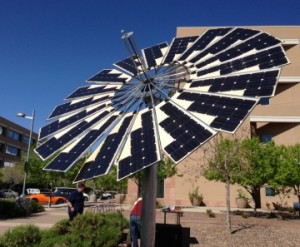 Monarch Power is already based in Scottsdale, Arizona, so an expansion to Goodyear, Arizona wouldn’t be a big move. I imagine Suntech is forced to unload its factory there for a rather low price, given its recent bankruptcy, paving the way for a logical buy by fast-growing Monarch Power and its Lotus Mobile products.

Ah, it only launched 3 weeks ago — that might explain why I hadn’t heard of the company before. 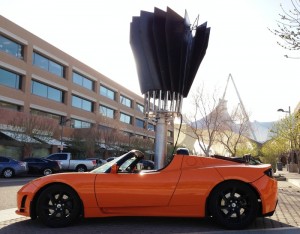 Monarch Power thinks it may be able to save the 43 jobs Suntech is about to cut, if the deal goes through.

“The rush of early buyers for Lotus Mobile 1.1 KW and Lotus Mobile Max 2.4 KW solar units for home and business has reaffirmed our belief that ‘solar’ and ‘mobile’ go well together,” said Professor Hui. “If our offer to purchase the plant is accepted and buyers keep ordering Lotus Mobile, we hope to shift manufacturing to Goodyear and save these jobs. My vision is to make people happy – and this gives everyone the opportunity to help out and save American jobs.”

In addition to selling its products, Monarch Power has actually started an IndieGogo campaign to try to get a Lotus Mobile placed in African Maasai or Native American communities.

The Lotus Mobile Max costs $7999, while the Lotus Mobile costs $3999. I’m not sure how that would compare to a conventional solar power system in your area, but it depends on a lot of factors. Surely, the Lotus Mobile units cost much more per watt than a conventional system, since they include tracking and other mechanical components. Tracking, of course, extends the operational day of the solar panels, but ,y understanding is that it generally doesn’t do so enough to create a better $/kWh outcome than conventional solar panels. The biggest benefits of the system, though, are its mobility and artistic qualities.

The Lotus Mobile products were just launched at an event on March 27th that included Arizona Governor Janice K. Brewer. Additionally, Congresswoman Kyrsten Sinema has “cited Monarch on the floor of the U.S. House as a spotlighted example of a fast-growing cleantech company that will benefit from her new Security in Energy and Manufacturing Act,” Lotus Mobile notes. “If the bill is passed, Monarch could obtain a 30% tax credit on purchase of the Goodyear plant.” Here’s a video of her visit to Monarch: 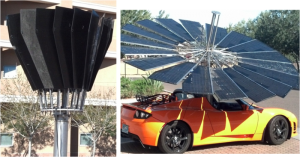 Getting back to the IndieGogo campaign, which is the most actionable item for most of you at the moment, Professor Hui states: “We’re asking people to support efforts to save American jobs and to donate to place Lotus Mobile solar units on tribal lands. From U.S. homes and businesses, to African Maasai villages and Native American homes – we’re pleased to make Lotus Mobile available worldwide – and to offer people the chance to save both energy and jobs.”

And from the IndieGogo page itself: “My passion is to help people all over the world to live a comfortable and sustainable lifestyle using my inventions.”

Aside from the Lotus Mobile products, Professor Hui has others in the works — for example, the Monarch Solar Electric Van (Monarch SEV). He envisions the electric van being used not just for people and shopping transport, but also for food vending and other commercial purposes.

“It can run entirely on solar energy, using an innovative design to maximize the use of the vehicle surface to collect sunlight,” the Monarch SEV website states. “Similar to the Monarch butterfly, the roof and sides of the car can open and track the sun. We are inspired by the Monarch butterfly, for its lightness, beauty, distance endurance, and efficiency.”

Clearly, not going to be practical for a common household, but it could potentially serve a useful niche market.

But focusing on one technology for the moment, what do you think of the Lotus Mobile products? Promising future? Or just destined for a very niche market… or even a short life on the market? Personally, I think the artistic appeal of them could help them to take off, but it’s a hard call, and that will of course have to be balanced with their cost per kWh of electricity.

By the way, yes, that is Professor Hui’s Tesla Roadster above, which he says he drives every day. His wife drives a Nissan Leaf. Here’s Professor Hui talking about these two vehicles, and electric vehicles, in general: