I recently ran across this interesting graph on reddit: 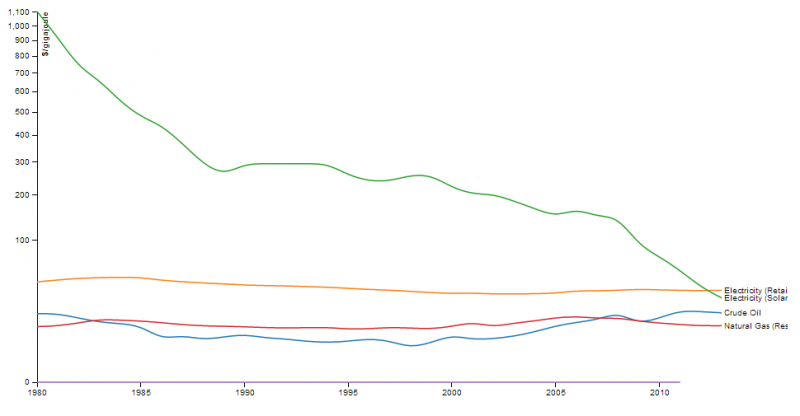 The title of the article in which the graph was housed (similar to mine above) was: “Solar Energy: This Is What A Disruptive Technology Looks Like.”

I think the graph is pretty clear — while the price of retail electricity, residential natural gas, and crude oil have all remained fairly constant in the past few decades (in inflation-adjusted terms), the price of solar has rolled down a long, big hill. And, the good news is, it’s still rolling.

For a bit more detail on the methodology, Brian McConnell, a software engineer and the creator of The Joule Standard, explains:

Using data from the Energy Information Agency, I pulled together a history of retail prices for natural gas, crude oil, gasoline and residential electricity, all adjusted for inflation. For each energy source, I converted the prices to $/gigajoule, using conversion factors from engineering tables. (For example, a million cubic feet of natural gas contains 1.083 gigajoules of energy content).

Next, using data from the National Renewable Energy Laboratory and other sources, I looked up the price history for solar power, in terms of dollar per Watt of system capacity (a standard unit of measure for solar). With this data, I built a cost model to translate the cost of a solar cell into $/gigajoule. The basic idea is to amortize the system cost over its useful life, and divide this by the average amount of power it generates per month. This allows the cost of solar to be compared directly to other sources.

The comparison shows quite clearly that the cost effectiveness of solar power is increasing exponentially. In 1977, solar cells cost upwards of $70 per Watt of capacity. In 2013, that cost has dropped to $0.74 per Watt, a 100:1 improvement (source: The Economist). On average, solar power improves 14% per year in terms of energy production per dollar invested.

There’s still a lot of room for improvement in the efficiency of solar cells and in bringing down their costs, through technological advancement and scaling up of production. If that trend graphed above continues much further, solar will be about as “disruptive” as it gets… for the better, of course.