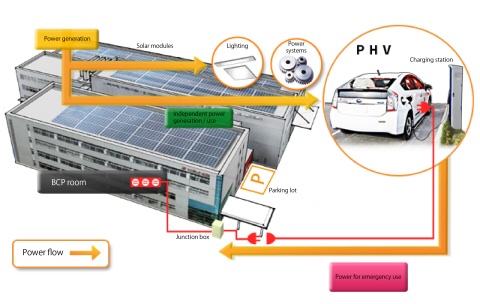 Kyocera Corporation recently announced that it has installed a “Solar Cycle Station, for EVs” at the headquarters of Shintec Hozumi Co, in Aichi Prefecture, Japan.

The system — which is based on a development plan drawn up by Shintec Hozumi — has been constructed as a sort of backup energy source during times of disaster. The solar-generated power can be utilized in such times to keep highly useful emergency vehicles running, as well as serving as a backup power source for buildings — through the routing of electricity from car batteries into buildings.

Kyocera’s “Solar Cycle Station” was originally created as an environmentally friendly solar-powered recharging station for electric-assisted bicycles way back in 2010. Since then, the company has also begun offering a modified system, designed for use with EVs — the Solar Cycle Station for EVs.

With the purpose of protecting the environment and saving electricity costs, Shintec Hozumi installed a 230kW Kyocera solar power generating system on the rooftop of its headquarters to provide clean energy for the building. Furthermore, as part of its Business Continuity Plan, the company adopted Kyocera’s Solar Cycle Station for EV in order to secure backup power for disaster prevention planning. KCCS undertook the design and construction based on this scheme, creating a recharging system which not only supplies solar power to plug-in hybrid vehicles owned by the company, but can also route electricity from the cars’ batteries back to the building when needed during an emergency.

Sounds like a pretty good deal. I wouldn’t be at all surprised to see such systems become more common in the coming years.

From Selenium to Silicon and Beyond: Celebrating the 60th Anniversary of the First Solar Cell Capable of Converting Enough Sunlight Directly into Electricity for Practical Power