Looking at the map, Hawaii appears to be an ideal solar market. Every sun-worshipper on Earth knows the value of a Hawaiian vacation for its fabulous solar insolation.

High electricity prices due to the huge costs of importing fossil-fuel-based energy resources make renewables like solar and wind power a no-brainer for Hawaiians.

And, for the most part, Hawaii has stepped up to the solar plate. Swinging home runs right and left, Hawaii has successfully gained 100% of new electrical capacity from solar. It ranked as #2 for watts per person in SEIA’s 2015 ranking of Top 10 Solar States, with 394 watts/person.

Representing a 3% increase over last year, $331 million was invested in Hawaiian solar installations, and this number is expected so see significant growth this year as well. “Over the next five years,” reports SEIA, “Hawaii is expected to install 853 MW of solar electric capacity.”

Throughout Hawaii’s value chain, over 104 solar companies contribute to the market, employing over 2,800 people. There is currently enough solar energy installed in Hawaii to supply clean, renewable energy to over 159,000 homes.

Google map of solar in Hawaii. Click image for interactive map at SEIA.org

Unfortunately, however, issues related to interconnection of distributed energy resources are driving major changes to the solar market in Hawaii. The dramatic closure of Hawaii’s net metering program in October 2015 is having a significantly negative impact on Hawaii’s electricity grid customers wanting to transition to solar power.

As reported by the Hawaii Solar Energy Association in September 2016, “Another month has passed, and no decisions have been made on key issues that are pivotal not only for the solar industry, but also the state’s clean energy goals, consumer choice, and customer savings. The outlook for Hawaii’s solar industry remains cloudy. … Our data indicates that for yet another month this year, industry activity has fallen significantly compared to the same time last year.”

HSEA continues, “With the Grid Supply program nearing its end, we can only expect the situation to get worse since the NEM backlog is not as robust as numbers might suggest and few companies are offering Self-Supply products. In light of this, it is imperative to raise the Grid Supply cap and to enact and implement Time-Of-Use rates and energy storage incentives to bolster the Self-Supply option.”

Hajime Alabanza, a spokesperson for HSEA, sums up the situation in Hawaii: “Consumers want to produce their own clean, homegrown energy and increase their monthly electricity savings. Unless key policy decisions are made immediately, customers will have few options other than expensive, fossil fuel generated utility power.”

The following is an in-depth exploration of the state of solar energy in Hawaii. Please feel free to offer further contributions in the comments.

The federal solar investment tax credit (ITC) is available across the United States. The ITC offers a credit from the federal government of up to 30% of a solar installation’s costs. However, you can only take full advantage of the credit if you have that much tax liability in the tax year. Under current law, the 30% ITC currently extends through 2019 but is scheduled for a phase-out after that.

The following are a limited sample of state solar energy incentives listed on the Hawaii page of the DSIRE Incentives Database. The Database of State Incentives for Renewables & Efficiency (DSIRE) website, operated by the NC Clean Energy Technology Center at NC State University, offers an up-to-date and comprehensive public clearinghouse for specific solar energy incentives across the United States, including federal and state incentives, programs, and policies.

The feed-in tariff (FIT) in Hawaii was established through the Hawaii Public Utilities Commission (PUC) in September 2009. Offered by the three investor-owned utilities — HECO, MECO, and HELCO — the rates for Tiers 1 and 2 opened in November 2010. The FIT rates for Tier 3 were approved and filed by December 30, 2011.

The Hawaii State Feed-in Tariff (FIT) program has 11 incentives. The solar-relevant FIT incentives are as follows:

On October 12, 2015, the Hawaii PUC voted to end net metering in favor of 3 alternative options: a grid supply option, a self-supply option, and a time-of-use tariff.

Customers with net energy metering application submitted before October 12 will have the option of continuing with net metering described in the DSIRE Net Metering Program Overview (last updated 10/21/2015).

As stated in the PUC’s filing, “This is necessary to ensure a smooth transition to a redesigned market-based structure for distributed resources in Hawaii, and the State’s commitment to meet a 100 [percent] renewable portfolio standard by 2050.”

HECO owns the utilities on Oahu, Maui, and Hawaii Island and the new changes only apply to new customers. Existing customers, those who have already applied for net metered systems, or those who are awaiting approval will not see a change in the HECO net metering program.

Under the Customer Self-Supply (CSS) option, new solar customers with energy storage systems are offered expedited review and approval of their systems. They do not receive any compensation for any electricity exported to the grid and are tightly restricted in how much excess electricity that can be exported.

Under the Customer Grid-Supply (CGS) option, new solar customers are (in theory) able to export electricity to the grid, but at a substantially lower rate. The CGS tariff reduces the previous tariff from the full retail rate (about $0.30/kWh) to the wholesale rate for the islands’ utilities. These wholesale rates range from around $0.15–0.28/kWh.

Unfortunately, this all looked good on paper but is not really working out in reality.

Hawaii Solar Energy Association President Rick Reed reports, “The abrupt end of grid-supply has pushed the local solar industry to the brink of collapse, and swift action is needed to prevent more layoffs and harm to customers.”

Since the end of net metering, according to the Hawaii Solar Energy Association (HSEA), the sector has lost about 450 jobs from among the more than two dozen solar companies operating in the state.

In September, the HSEA reported that the Customer Self-Supply program had received 33 applications, but needs energy storage incentives and approved time-of-use rates to foster quicker growth.

Although solar advocates have called for increases in caps for Customer Grid-Supply, HECO is hesitant. Darren Pai, a spokesperson for HECO, replied, “We believe any increase should be limited in scope and consistent with the PUC’s guidance on this issue and State law.” Pai continued, “We recommend that projects under any increased Grid Supply program capacity be right-sized help maintain safe, reliable service and allow for maximum customer participation.”

In 2014, two bills establishing tax incentives for energy storage projects were introduced. HB2618 offered a 20% investment tax credit, or a utilization credit equal to $0.08/kWh of capacity for a project’s first 10 years. SB 2932 required the PUC to establish an energy storage portfolio standard. Unfortunately, both bills failed to pass.

The 2016 legislature session failed dismally, as well. Although energy storage was hailed as the best solution after the Hawaii PUC ended the net metering program in October 2015, two new bills supporting storage rebates and tax credits stalled in this year’s session.

Democrat Representative Chris Lee, Chair of the Committee on Energy and Environmental Protection, reported, “Both died at the last minute, along with several other bills, due to a stall in unrelated negotiations between the House and Senate.”

The purpose of SB 2738 was to provide a rebate for energy storage systems. This bill called for $50 million from Hawaii’s Green Energy Market Securitization (GEMS) program to facilitate energy storage systems for Hawaii’s “underserved residents,” characterized as “low to moderate income homeowners, renters, churches, and non-profits.”

Energy and Environmental Protection Chairman Lee worked on and actively supported both bills. He reports that they are expected to be taken up again, possibly joined into a single bill, with the start of Hawaii’s new legislative session in January 2017.

Although financial concerns are still likely to prove problematic, Lee is optimistic. “It should be easy to pick up from where we left off,” he states, “since we worked out most of the issues this year.”

Although tax incentive bills are not yet supporting widespread residential adoption, it is worth noting that Hawaiian Electric Company has already issued an RFP for energy storage systems ranging from 60–200 MW.

As covered in a recent article on Cost of Solar, the costs of a solar installation in Hawaii are dropping dramatically, especially in the last few years.

Jake pointed out that the 2011 price per watt for a system installed in 2010 was $8, and “a 2014 source said that installed solar panel cost was $4.04 per watt. However, prices have dropped since then.” Brian Korgaonkar, writing for Renewable Energy World, places the end-of-year 2015 cost at $3.53 per watt in Hawaii.

With or without energy storage systems, a homeowner’s investment in solar PV is an excellent decision. Given the extremely high prices that residents of Hawaii, especially on Oahu, are paying for imported oil-based electricity, any relief provided by a solar installation is a big help.

A residential solar PV installation will likely produce electricity for about 20 years, offering significant savings over this long term. And, even if the homeowner decided to move after only 10 years, for example, the solar system typically contributes around 3% to the selling price of the home.

As reported by the Solar Energy Industry Association (SEIA), the following are notable solar installations in Hawaii: 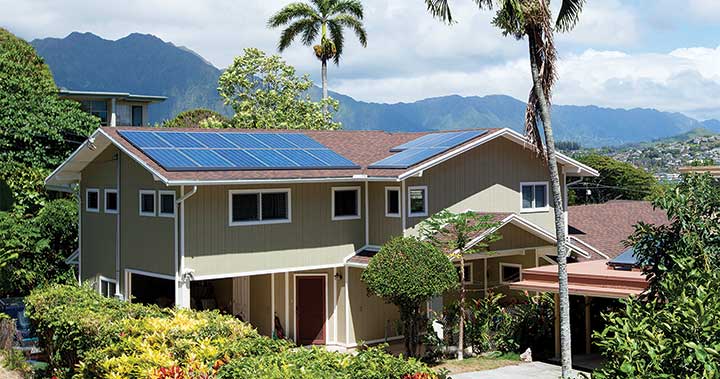 According to SEIA, there are currently over 104 solar companies employed throughout the value chain in Hawaii, ranging from solar system manufacturers to system installers. The following is an incomplete listing of solar installers in Hawaii, chosen and listed based on high customer reviews and recommendations:

(Please feel free to add your own recommendations and/or reviews in the comments, below!)

Leading the national energy dialog, Hawaii is a major player in an innovative collaboration between the National Renewable Energy Laboratory (NREL) and SolarCity.

Using advanced modeling and inverter testing at the Energy Systems Integration Facility (ESIF), NREL and SolarCity are collaborating with the Hawaiian Electric Companies to address stability, reliability, and safety challenges.

Analyzing high penetrations of distributed PV with the electric system has helped to update interconnection standards and codes. And, as a result, IEEE 1547 and UL 1741 were updated to standardize inverter testing procedures and protocols for advanced inverter functionalities.

“We know how important the option of solar is for our customers,” notes Colton Ching, Hawaiian Electric’s Vice President for Energy Delivery. “Solving these issues requires that everyone—utilities, the solar industry, and other leading technical experts like NREL—work together. That’s what this work is all about. With the highest amount of solar in the nation, our utilities are facing potential reliability and safety issues before anywhere else.”

The results of this collaboration have been so successful that Hawaiian Electric was able to clear the waiting list of around 2,500 customers in line to connect their PV installations to the grid. In fact, the utility more than doubled the number of rooftop installations allowed on the grid. Limits on distributed solar power went from 120 percent to 250 percent of the minimum daytime load.

NREL notes that Hawaii’s successful results are “showing utilities across the country that distributed solar is not a liability for reliability—and can even be an asset.”