Solar Power For Churches Is Getting Easier & Cheaper

Faith members considering solar power for churches, temples, mosques, and other houses of worship are discovering that installations are getting both easier and cheaper. Since 2009, according to the Solar Energy Industries Association (SEIA), costs for non-residential solar installations have dropped around 73%, from around $7.50 per kilowatt to today’s cost of about $2 per kilowatt. 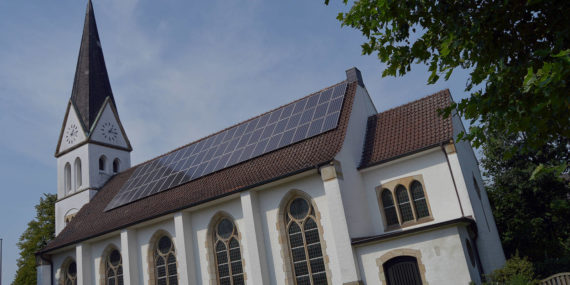 Conversations On Solar Power For Churches Are Trending

In Minnesota, for example, approximately 400 congregations are working with Minnesota Interfaith Power and Light (MNIPL), a faith-based nationwide nonprofit concerned with climate change and environmental stewardship. MNIPL Executive Director Julia Nerbonne notes that conversations on solar power for churches are trending all across the state.

While the church spent around 2 years to complete researching and installing its solar system, securing $119,000 in funding for St. Christopher’s solar project was facilitated by federal and state programs. Joel Norton, a member of St. Christopher’s Green Team, says that the church worked with a local solar installer, applied for a federal tax rebate program, and took advantage of the Made in Minnesota solar incentive program.

Norton reports, “After the financial arrangements were in place and engineers inspected the church roof to ensure it could hold the extra weight, the panels were activated in April.” St. Christopher’s Green Team states that “more than 17,000 kWh have been produced so far, saving 35 tons of CO2. We are also significantly reducing our monthly electric bill.”

St. Christopher’s team designed the solar panel installation to leave the shape of a cross exposed on the church’s roof. Norton explains that it’s in the hands of the faithful “to preserve God’s creations.”

Reverend Glenn Berg-Moberg, senior pastor at St. Anthony Park Lutheran, agrees. He says, “The fat truth is there has been, and still is, a big portion of the church that thinks of the Earth as something given to us to use up, and that’s not a good representation of what a biblical view of the world should be.”

“The biblical view,” says Rev. Glenn, “is the world doesn’t belong to us; it belongs to God, and we are the caretakers.” 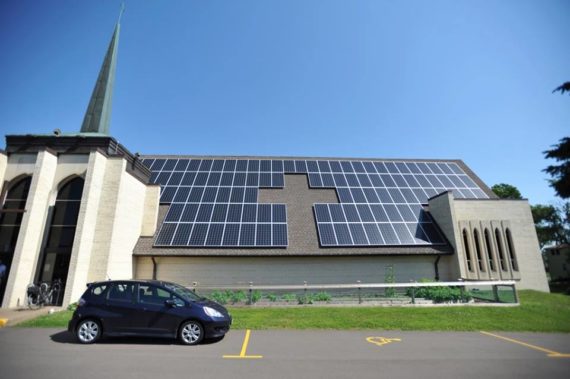 At New Life Presbyterian Church in Roseville, the Sustainable Energy Task Force has been researching solar power for churches for several years. Although they haven’t completely given up on installing solar panels on their own building, they are currently constrained by a rooftop covered in shade and compressors. “It’s not a great fit for a solar array,” says Task Force Chair Kate Wolfe-Jenson.

MNIPL’s Nerbonne confirms that most organizations want on-site solar panels. However, as in New Life Presbyterian’s case, a share in a community solar farm is often the next best solution. With its new contract for community solar, New Life Presbyterian will lock in the benefits of clean, renewable solar power for the next 25 years without taking on all the costs of an on-site installation.

Andy Stahlman, a sales representative for Innovative Power Systems (IPS) in Roseville, MN, is working with around 10 faith communities, including New Life Presbyterian. He explains, “when IPS contracts with a faith community or other nonprofit, it owns the solar power system, so nonprofits don’t pay out of pocket and the developer receives both federal tax rebates and part of the organization’s electric bill credit.”

Current political fearmongering aside, many states are working hard to increase the transition to renewable energy in the US. Minnesota is an inspiring example.

Although sizes of community solar systems and compensation rates have seen changes since these initial laws went into effect, as of Jan. 1, 2017, electricity bill credit rates will be standardized. Community solar subscribers not only benefit from reduced carbon footprints from their own use of solar energy–they also receive a credit on their electricity bills for every kilowatt-hour of excess power that the solar panels produced.

The new law in Minnesota means that, for the duration of a 25-year contract with a solar farm, the subscribers’ credit rate will not change except for inflation. This means that even as solar energy gets cheaper and cheaper, solar farm subscribers do not have to worry about their credit rate decreasing.

An additional bill credit especially relating to solar power for churches, faith-based organizations, and other nonprofits may be approved in March 2017, by the Public Utilities Commission.

In St. Paul, a group of around 8 faith communities have a dream of building a community solar garden in the east metro region. MNIPL’s Nerbonne explains that MNIPL is working with the church leaders on the details of location and financing. They are waiting for the Public Utilities Commission’s decision in March before applying to the state for funding and other incentives.

Nerbonne notes, “Between looking for the best deal and understanding how the financing works, transitioning to solar can feel daunting.” However, she explains, “All of a sudden, the market has come into balance where now, even without big incentives like Made in Minnesota, it’s worth it for these congregations.”

She adds, “Low-income faith organizations historically have written off solar power as an option for only the rich, but they shouldn’t.”

“I think we are just on the brink of tons and tons of faith communities doing solar,” says Nerbonne, adding, “I think we have literally just begun.”

MNIPL’s project, “Just Community Solar: A Story of Faith in Action” is “connecting the dots between climate, racial, and economic justice.”

How North Carolina Schools Could Save Millions (Hint:...