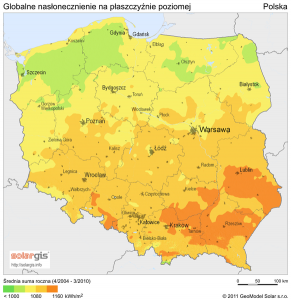 Poland is about ready to put into place a solar feed-in tariff policy similar to that used to propel solar power growth in Germany, the Czech Republic, Spain, Italy, Japan, and other leading solar power countries. I recently gave a guest lecture to a group of renewable energy graduate students here in Poland and happened to talk with one of the people who has helped create the policy (one of the group’s professors). He mentioned that it would be similar to Germany’s solar feed-in tariff (at least when it comes to the technical matters he was working on), but would of course be slightly different.

Word on the street is that the law may be passed in March. However, even if so, it wouldn’t go into effect until mid-2014 sometime due to the European Commission notification process (which seems a little absurd to me, but I’m not familiar with the details here).

“In the coming days, Poland’s Ministry of Economy is scheduled to present a revised bill for renewable energy funding to the Cabinet,” PV Magazine writes. “Following the adoption of the draft law by the Cabinet – expected by the end of March – it will be sent to Parliament, where only minor changes should be made.”

“In parallel, a notification will be brought before the European Commission (EC).” This part of the process could last up to 8 months.

The feed-in tariff will be for other renewables as well as solar. One of the things that has actually delayed the law a bit has been the difficulty of nailing down how much support to give to “co-firing from solid biomass in coal-firing boilers, which in Poland accounts for almost 50% of all renewable energy, and around 3 million tons of which is imported annually.” And a lot of work has gone into a new certification process for such biomass to make sure it’s sustainable. To read much more about the biomass situation in Poland (including a bit of controversy about renewable energy credits), check out the PV Magazine post linked above.