This story was first published on Planetsave. Reprinted with permission.

Does the phrase “solar power” refer only to electricity? Or does it have a deeper meaning? In parts of Africa, solar power is not only about renewable electricity; it’s also about the empowerment of women, according to a report from Public Radio International (PRI). 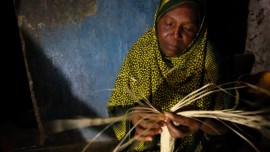 In sub-Saharan Africa, less than 10% of the population have access to electricity.  This area is known by many as the “land of eternal darkness.” Once the sun sets, the people have only the pale light of crude kerosene lanterns to see by. The lamps fill their dwellings with thick smoke. Often, they get kicked over and start deadly fires.

In the remote Zanzibar village of Matemwe, Kasia Hassan cooks dinner for her husband and 9 children by the light of these kerosene lamps. She says she has heard of solar panels, but has not considered them, even though they would cost less than what she pays for kerosene. She says that’s a decision only her husband could make.

Matemwe is also home to a group of 13 illiterate women who were quietly recruited and trained as solar engineers by an NGO from India called Barefoot College. They call themselves the “solar mamas. Thanks to them, Kanao Sharif Haji, who lives not far from Hassan’s hut, now spends her nights weaving reed mats under bright LED lamps. The lamps are powered by a battery charged by a small solar panel on the roof.

The solar mamas built and installed a small solar system for Haji and a few of her neighbors. It costs them $3.00 a month — far less than what they had been spending for kerosene. But that’s just the beginning of the empowerment solar energy has brought to Haji and her family.

The work she does at night has raised her family’s income by up to $15 a month — a huge sum in these parts. Even more importantly, her 14-year-old daughter, Nuru Sheha, can use the same light to study while her mother weaves. Haji says Nuru is doing well in school and dreams of becoming an English or math teacher.

Mize Juma Othman is one of the solar mamas. When she went to India for training as a solar engineer, her decision led to divorce. The men in her village told her husband that her knowledge would make her promiscuous. Now she is remarried to a man who supports her work and she is earning $60 a month — a sum that makes her almost wealthy in this part of the world.

The government of Zanzibar is building a new solar training center where the solar mamas can pass on their knowledge to other women. The new center “will bring us to the reality that once women are empowered, they can do anything,” says Asha Abdallah, with Zanzibar’s Ministry of Empowerment, Social Welfare, Youth, Women and Children.

The center will train two dozen women a year, each of whom will install and maintain 50 systems a year. It’s the first of six solar training sites Barefoot College plans to build in Africa, from South Sudan to Senegal. Change comes slowly to such places, where conservative, patriarchal societies are the norm. But as one of the solar mamas points out, “We are 13 now, and when we are old, we will be many, many more.”

Perhaps “solar power” is about more than electricity after all.