A Swedish company using technology based on 12 years of research is now marketing a product that can produce both electricity and heat with solar power. 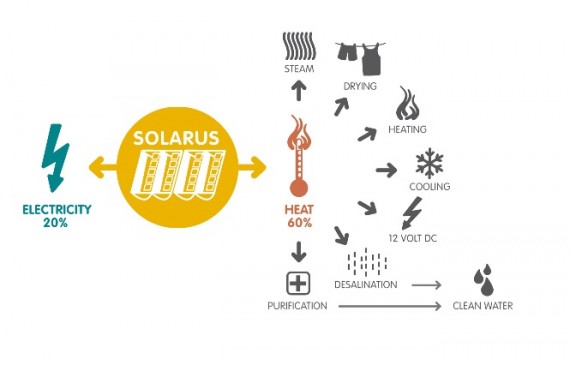 Solar panels don’t work at optimal efficiency when they become too hot, so Solarus has developed a way to keep them cooler and at the same time collect the heat, which can be used in a hot water boiler. The hot water can be run through a tap so people can utilize it.

This hybrid system is more energy efficient because it improves the electricity production of solar panels while heating water. One square meter of a Solarus solar panel can produce 136 watts of power and 400 watts of heat. Solarus says that it can achieve 30 cents/watt with a 40 MW solar power plant, when you include the heat production component.

Imagine a 40 MW solar system for a manufacturing plant and all the hot water that would be created as well.

A standalone product with 300 watts is planned for small households. It will generate electricity and hot water.

Solarus employs blue economy principles, which are based on physics and wasting nothing.

In fact, the founder of the blue economy framework has collaborated with Solarus. “Solarus AB… began manufacturing solar panels out of recycled carbon fibres discarded by the aerospace industry. Today, Solarus AB is able to offer cost-attractive and competitive solar technologies without the aid of government subsidies.“

If the thermal part of the equation doesn’t sound too impressive, just consider that most homes in Israel use the sun to generate hot water.

Hot water from solar is not a trivial contribution to a cleaner, greener world. We might tend to think of solar power as only solar panels used for generating electricity, but hybrid systems do exist and they can be very beneficial.

6 Ways To Make Solar Power More Affordable For All