Solar power is now cheaper than power from fossil fuels in most of the developed world. It is especially competitive in off-grid markets. There are still huge barriers to deployment — financing, common expectations to “soon be connected to the grid,” and bureaucracy — but several firms are finding a way to connect people with cheap and clean solar power. 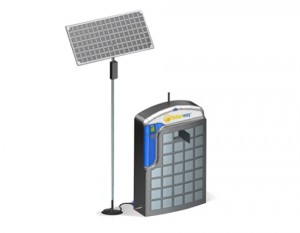 Just as mobile phones leapfrogged past landlines, solar is leapfrogging past fossil fuels. And much of the time, the solar is being used to charge these mobile phones. One company, Solar Way, just announced yesterday at the Mobile World Congress in Barcelona that it is looking for partners to help bring its solar-powered mobile phone charging station to more of those in need.

The solar charging stations are said to be able to power 14 phones at a time. The aim is to bring them to mobile phones shops, other retail outlets, and post offices. “In order to bring the SCPS to the largest possible customer base, we are seeking to partner with mobile operators — particularly those with millions of customers off-grid — as well as retailers and other consumer outlets which have large footprints across Africa and other emerging markets,” said Marco Signorini chief executive of Solar Way.

The actual name given to Solarway’s charging station is simply Solar Powered Charging Station (SPCS) — wonder where that came from. Solar Way writes: “Offering a ‘phone locker’ in which to deposit a phone securely whilst it charges, the SPCS will charge the customer’s cell phone for a small fee, depending on the amount of time the phone takes to charge. For those living without access to grid power, the SPCS will be a welcome facility as customers can currently go days (if not weeks) without being able to charge their cell phones and access their mobile services.”

This week, Solar Way also unveiled a solar-powered candle, called the Power Stix, that can also charge a mobile phone. “As well as being safer than candles which cause thousands of house fires every year and cleaner than kerosene which causes dangerous indoor air pollution, the Power Stix is significantly cheaper, costing less than $20. The average African family living off-grid spends $12 every month on candles.”

$5.6 Million In Electricity Savings At California Schools In 2012 Thanks To Solar Power