SolarCity Could Install 1 GW Of Rooftop Solar In 2015

A recent report from SolarCity says it is on track to install more than 1 gigawatt of rooftop solar in 2015. The company reported installations of 153 megawatts during the first quarter 2015, beating its own forecast of 145 megawatts. That compares to 176 megawatts in the fourth quarter of 2014. Installations are up 87% from a year ago. 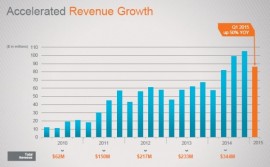 The cost of installing photovoltaic panels was $2.95 per watt in the first quarter. That is up 3% from prior quarters, due largely to the rigors experienced by crews during an unusually long and harsh winter. Nonetheless, that figure is down 9% from the same period last year. SolarCity has reiterated its advice to investors that it expects to install 920 to 1,000 megawatts of rooftop solar in 2015.  Second-quarter revenue is expected to be between $86 million to $92 million.

SolarCity is the largest rooftop solar company in the United States. It’s chairman, Elon Musk, is also the CEO of Tesla Motors and SpaceX. It has pioneered many of the market innovations, such as no-money down leasing, that have driven the explosive expansion of rooftop solar in America.