The Silicon Valley startup SolPad has just announced the specs, pricing, and pre-order date for its all-in-one solar plus storage mobile solution, which could help usher in a new era of entry-level solar.

We first covered the SolPad product back in October of last year, with writer Matthew Klippenstein calling it “a glimpse of the future.” That article raised a lot of questions in the comments section about the details and reliability of such a device. Some of those comments called it vaporware, while others questioned the wisdom of integrating batteries into the body of a solar panel and the legality of simply plugging such a system into the grid without an adequate grid-tie arrangement, and still others asked why it was even needed with the current state of solar technology. Most of which were decent skeptical questions, and all of which are expected on a piece about a forthcoming “breakthrough” solar product. However, it looks like the SolPad Mobile is getting ready to enter the market, as the company has released additional details about how much it will cost and when it will be available, so we’ll soon get an opportunity to see how the product will be received once it is released into the wild, so to speak.

The SolPad, which lays claim to being “the world’s first and only truly integrated solar panel,” debuted to the public at CES 2017, where the company said it “marks a quantum leap in personal power.” The first version of the SolPad to hit the market will be the SolPad Mobile, a 72-watt solar panel with an integrated 600 Watt-hour battery and a host of other features (LED light, Wi-Fi, a ‘talking’ user interface, and more), which will be available for pre-order beginning May 3rd, 2017 at an introductory price of $1395.

The Mobile version is intended primarily as a portable power solution, not a home solar array, as its 25-pound weight and relatively small size (28″ long by 21″ wide by 1.8″ thick) could be carted along on off-grid adventures easily enough (assuming you’re not backpacking). The device is designed to be used as a standalone electricity source or to be chained together into a solar micro-grid, with the onboard inverter supplying AC power to other devices and a Wi-Fi connection enabling the creation of a mesh network. Two AC outlets can output 2000 watts (peak) and 1000 watts (continuous), and a pair of fast-charging USB ports will supply DC current. 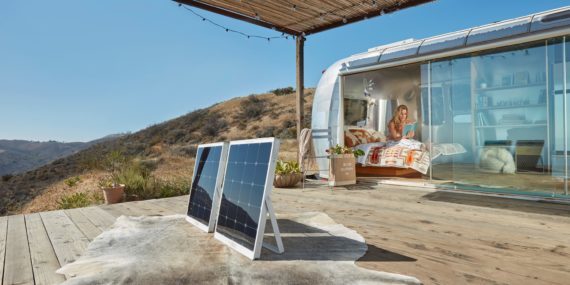 According to SolPad, the Mobile’s battery can be fully charged via the solar panel in about 10 hours, or via grid power in about 5 hours. The company’s SolControl software is said to allow users “to send solar power to specific items, appliances and rooms, and experience total control of your power with an iPhone,” and to “choose the best time to use solar or grid power for maximum utility bill savings.”

“SolControl is the only hardware and software solution that integrates solar generation and energy storage with automated energy management. SolControl’s engaging and interactive user interface (UI) makes homeowners aware of when and how they are consuming energy. It puts cost-saving control into a gamified and easy-to-use smartphone application. SolControl also helps conserve electricity by autonomously learning usage habits and intuitively providing suggestions to further optimize power consumption.” – SolPad

Here’s an overview of SolPad:

Still to be announced are the pricing and pre-order date for the company’s larger offering, the SolPad Home, which is a 330 W solar panel with integrated 500 Wh battery that is intended to be installed as a rooftop array and which is said to be “like having a smart-energy computer on your roof.” Learn more at SolPad.

[Edit: The original version of this article referred to the company as SunCulture Solar, but the startup has actually changed its name recently to SolPad, so the article has been updated to reflect that change.]