Researchers at Michigan State University have been successful in creating a clear solar concentrator that can be applied to windows to generate electricity and allow the windows to remain transparent. Right now, their solar conversion efficiency is one percent, which means they aren’t generating much electricity yet, but they aim to increase that number to five percent, and eventually seven. 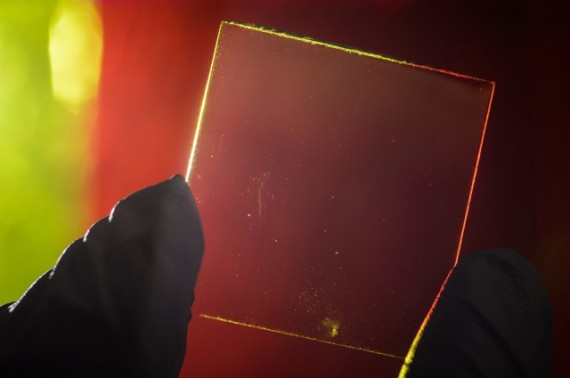 Solar panels are typically much more efficient than that, but they also can’t be seen through. The Michigan State solar concentrator could be placed on building windows and not block any views. It could also be used on a cell phone, or a tablet computer to generate some electricity and still allow the user to see the contents of a clear screen.

The practical reason that this kind of research is exciting is that there is potentially a tremendous amount of window surface area that could be treated with a functional transparent technology to generate a great deal of electricity, “In 2009 alone, 437 million square feet of windows were installed in non-residential buildings in the United States. That many square feet of standard solar panels would generate around 4 gigawatts of power, roughly the total installed solar capacity in the U.S. today.”

“No one wants to sit behind colored glass It makes for a very colorful environment, like working in a disco. We take an approach where we actually make the luminescent active layer itself transparent,” explained Richard Lunt, MTSU assistant professor. Yimu Zhao, Benjamin Levine, and Garret Meek also worked with Lunt on the transparent solar power research.

Transparent solar, in the form of thin film, is not new.  Scientists at the DOE were working on such a project four years ago. Researchers at Stanford were conducting research into peel-and-stick solar cells in 2012. The thin-film solar cells used in the Stanford research were not entirely transparent though.

5 GW Of Distributed PV Solar Expected For China This Year