Researchers at Oregon State University are experimenting with ways to generate electricity using thermal solar materials. They are working with a process that changes strontium carbonate into strontium oxide and carbon dioxide. The strontium carbonate decomposes, but when the materials recompose they release stored heat. 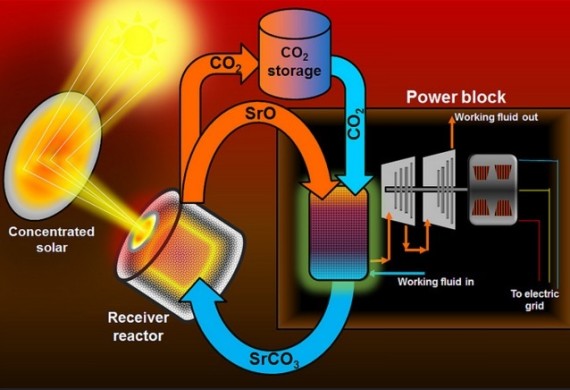 “In these types of systems, energy efficiency is closely related to use of the highest temperatures possible. The molten salts now being used to store solar thermal energy can only work at about 600 degrees centigrade, and also require large containers and corrosive materials. The compound we’re studying can be used at up to 1,200 degrees, and might be twice as efficient as existing systems. This has the potential for a real breakthrough in energy storage,” explained Nick AuYeung, an assistant professor of chemical engineering in the OSU College of Engineering.

The materials that are being used are non-flammable and potentially cheaper than those currently used by CSP, though recent successes in using the new materials have occurred only in lab environments. If you are familiar with concentrating solar power, you know that it has been proven to work in real-world solar facilities. The costs of construction can be high, so this OSU research might be helpful in bringing them down.

Also, the solar thermal material currently used — molten salts — has some limitations. AuYeung said they typically can be heated to 600 degrees Centigrade, but the material he is using can be used at 1,200 C, which means it could be twice as efficient. Imagine being able to store about twice as much energy in the form of heat at a concentrating solar power plant. At that higher temperature, it might also be used to heat air and steam to turn turbines which generate electricity.

If you haven’t heard of concentrating solar power, you might have at least noticed some flurry of news stories about solar power killing birds. However, most of those stories were very sensational and grossly exaggerated the number that were killed.