In advance of Veterans Day, the non-profit solar installer GRID Alternatives has announced a hookup with Wells Fargo to kick off “Troops to Solar,” a three-year program aimed at training more than 1,000 military veterans for jobs in the burgeoning solar industry. The program will also train service men and women who are still on active duty, which will help foster a seamless transition to employment once they return to civilian life.

So…it doesn’t seem like those 35 permanent jobs promised by the Keystone XL oil pipeline project will be missed. 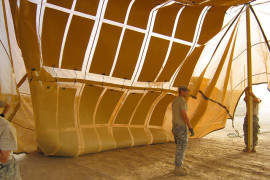 As the US Department of Defense ramps up its transition to renewable energy, more servicemen and -women are becoming exposed to solar power. That includes both utility scale solar and rooftop solar for housing and other facilities at permanent military bases, solar canopies and solar-enabled microgrids for forward bases, and even portable solar gear to carry into the field.

That familiarity is one factor that could make military service an attractive background for solar employers. However, there are deeper elements at work. Nat Kreamer, a veteran and Board Chairman of the trade organization SEIA (Solar Energy Industry Association), explains:

As an industry, we are completely committed to hiring more veterans. Today, America’s solar energy companies already employ twice as many veterans as the average U.S. business. We hire veterans because they come trained, ready and passionate. The solar industry is filled with people who are motivated to build our economy, improve our environment and strengthen our national security.

…Solar, like the military, is not just about the paycheck; it is also about working for something larger than oneself.

Last spring SEIA locked arms with First Lady Michelle Obama and Dr. Jill Biden in support of Joining Forces, an initiative aimed at rallying support for US service members and veterans, with a commitment to fill 50,000 solar jobs with veterans by 2020.

With its goal of 1,000 trained solar workers, the new GRID Alternatives Troops to Solar program will take a nice little bite out of the 50,000 mark.

As part of Troops to Solar, GRID Alternatives is launching a new focus on Native American veterans and “high-need” communities on tribal reservations.

Wells Fargo notes that it is a longtime partner of GRID Alternatives, having invested more than $3.8 million (including the latest grant) since 2007. The funding has gone to GRID Alternatives’ twin goals of installing solar systems for low-income households, including veterans, while also training veterans for solar jobs.

For those of you unfamiliar with GRID Alternatives, here’s a rundown:

GRID Alternatives works all over the country, with a solar project in Baltimore being one recent example, and this year it also formed a powerful solar jobs training partnership with industry leader SunEdison.

Now that the dust has settled over President Obama’s decision to deny a federal permit for construction of the pipeline, at least one conservative observer has hinted that the President did TransCanada — and its investors — an enormous favor by effectively killing the project. It doesn’t make sense in today’s glutty oil world, as described by The New Republic (cited in a longer New York Magazine piece):

Tar sands oil is remarkably expensive to cultivate…Oil is currently trading at less than $50 a barrel and there’s increasing speculation that the stuff will remain cheap for a long time to come. The plunge in oil prices is already affecting tar sands production: Earlier this year, Shell cancelled plans for a major investment in the tar sands. Nor are they the only ones calling off future development. The plunge in oil prices and fall-off in investment means that Keystone simply no longer makes economic sense.

We’re thinking that all of those pipeline jobs “lost” over Keystone will be made up by the renewable energy industry, and then some. SEIA’s commitment alone tops the 42,000 temporary construction jobs promised by TransCanada for building Keystone XL, and the Joining Forces initiative is backed up by other Obama Administration solar jobs initiatives.

However, take a look at one of our favorite news blogs — FuelFix.com — and you’ll notice that those zombie oil and gas pipeline jobs could very well spring to life in eastern states, so stay tuned.