In February, I reported on EnergySage’s launch of the “Expedia of solar power,” a comparison shopping site aimed at getting customers multiple quotes for a solar power system on their homes or businesses. At the time, I wrote that 1BOG (with which we have a partnership*) offered essentially the same service. My understanding was that 1BOG got the best quotes they could from installers in the region and passed those on to customers. I got a bit of criticism in the comments because it EnergySage links people to multiple installers who compete for the project, while 1BOG seemed to just have partnerships with one installation company in each region (for example, hypothetically, SolarCity in the Bay Area), so it wasn’t stimulating competition between installers. I still think the comparison fit well (and I have since seen other leading solar reporters make the same comparison), because the overall purpose of both sites = make the solar power shopping experience simple and easy, and get customers the best quotes possible for a solar power system. However, that’s not to say one model isn’t a bit better than the other, and that EnergySage’s model might have generated more competition between installers, resulting in lower prices for residents.

Following that post, I got a nice walkthrough of how EnergySage’s whole system works. I then reached out to 1BOG to get more details about its model so that I could write a post or two detailing the similarities and differences between the two companies. What I found out was that some big changes were coming to 1BOG’s system… and I needed to wait. Those big changes were just announced today.

I’m still planning to write up one or two more in-depth pieces on EnergySage’s system and 1BOG’s system, but real quickly, I’ll go through what 1BOG is now offering and some ways it is similar to or different from what EnergySage is offering. 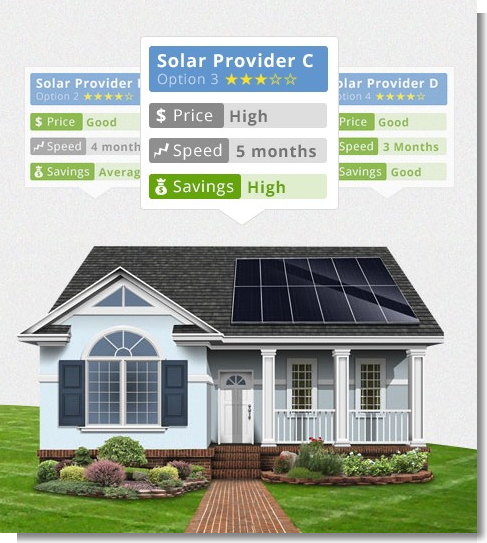 1BOG has announced that it is offering the “first online solar marketplace for residential homeowners,” which seems like a bit of a slight to EnergySage, which (as I noted above) launched such a service in February. 1BOG also compares its service to Expedia or Kayak — as EnergySage did. (My question is why nobody mentions Orbitz, which is my favorite such site….)

Like EnergySage, 1BOG shows customers various options for going solar, getting quotes from competing installers when possible. From a press release that went out today, 1BOG writes, “Based on their location, electricity consumption, and size of their house, homeowners can compare different offerings to go solar for little or no money down, have the option to create custom payments and investment options, or explore pre-paid opportunities.”

Like with EnergySage, the customer can get a supporting hand from a 1BOG employee throughout the process.

“Anyone who owns a home and has a high monthly electricity bill should consider solar. Now all they have to do is go to 1BOG to shop and compare options, and in minutes they’ll see what solar can do for them,” said Ousman Bah, managing director of 1BOG. “Our advisors will walk them through PPA or leasing options, help them understand what is the best option based on their area and their needs, and give them the information they need to make an informed decision. It’s all free, and there is no hassle.”

As with going solar in general, there are huge savings to be had. 1BOG writes: “On average, homeowners that go solar via 1BOG save an average of over $1,200 US per year and are able to lock in power rates for up to twenty-five years, thus saving them from rising utility costs.”

The main differences that I think I see at the moment between 1BOG and EnergySage (will get confirmation before posting the more detailed articles) are that:

What’s the best option for you? If you’re in a region served by both companies, my suggestion would be to use both services! They’re both free and easy to use, and you’ll learn more and be able to get the best deal by using both. When I shop for a flight or hotel, I never use just one site — I generally use a combination of Orbitz, Expedia, Booking.com (for hotels/hostels), and perhaps one or more other such sites. Shopping for something as significant as solar power, I’d surely use both resources if possible.

*Our partnership with 1BOG goes as follows: We feed people to their site through the ads/forms on our website, and we get a cut of any sales to those customers. I keep our reporting on the company unbiased and the same as it would be if we didn’t have a partnership. My goal is simply to help more people go solar, and to make a living while doing so.