Everyone loves solar. Well, ok, not everyone, but the HUGE majority of people. It’s been like this probably as long as the idea of solar power has been around. Thomas Edison was clearly a huge fan:

Now, a new study conducted by Hart Research on behalf of the Solar Energy Industries Association, shows that Americans of all stripes are still fully in love with solar.

Here are the bullet points: 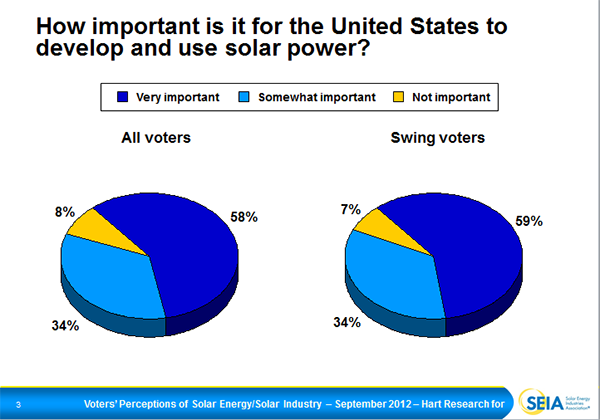 9 of 10 voters (92%) believe it is important for the United States to develop and use solar power.

This is the 5th year in a row that the survey has been conducted, and it’s the 5th time solar has been the popular kid on the block. As stated above, even Republicans (voters, not Congresspeople, that is) love solar:

“The poll found that more than nine out of 10 (92 percent) of likely voters feel that the U.S. should develop and use more solar energy. This support was strong across the political spectrum with 84 percent of Republicans, 95 percent of independents, and 98 percent of Democrats agreeing.” 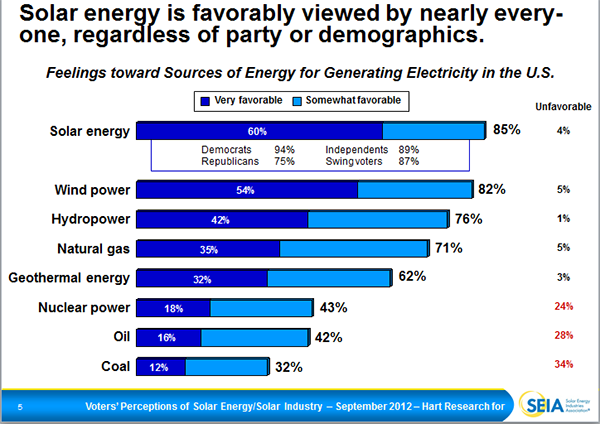 If there’s one issue worth supporting loud and clear and basing an election on, its clean energy, and especially solar. Clearly, that’s not what the Romney/Ryan ticket is doing, and even the Obama administration isn’t being very clear about it. Obama’s energy message is all about “all of the above” — I wonder how much more popular he might be if he went on a really strong clean energy push with a focus on solar?

Geoff Garin, president of Hart Research Associates, says: “These results clearly show that American voters across the political spectrum have a strong favorable view of solar energy and the solar industry, and they believe that government has an important role to play in allowing this industry to grow and succeed.”

“The consistency of these findings is also impressive,” said Molly O’Rourke, partner at Hart Research. “Voters express the same high levels of support across a variety of measures, from their very positive perceptions of solar energy to their enthusiasm for policies that promote greater use of solar.”

And these weren’t just general or non-competitive questions! Take a load of these stats:

“Voters’ favorable view of solar translates directly into widespread bipartisan support for federal incentives fostering solar energy. Nearly four out of five (78 percent) of voters say the government should provide tax credits and financial incentives to encourage the development and use of solar energy. Fully two-thirds of swing voters (67 percent) chose solar above any other energy source to receive tax and financial incentives.” 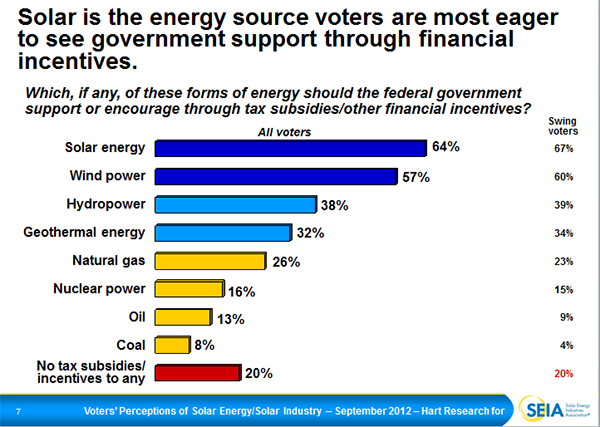 Voters identify solar as the energy source they are most eager to have the federal government and U.S. policy support through tax credits and financial incentives. In fact, when presented with eight different forms of energy that the federal government should encourage (in addition to the option of saying none), 64% of voters, including 67% of swing voters, say that solar should be on that list (the next highest is wind power at 57%). 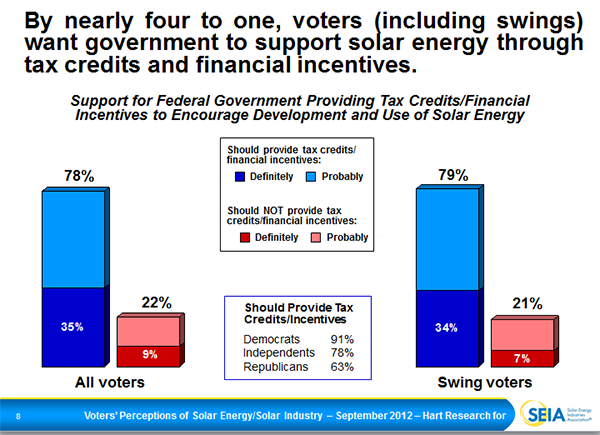 Yes! And yes, please — give us more solar!

Avatar 2 To Be Powered By Solar (Lightstorm Entertainment Will Be, That Is)