Are Super-Thin Solar Cells The Future? New Solar Cells Developed That Are Pound For Pound Up To 1000 Times More Powerful Than Conventional Photovoltaics 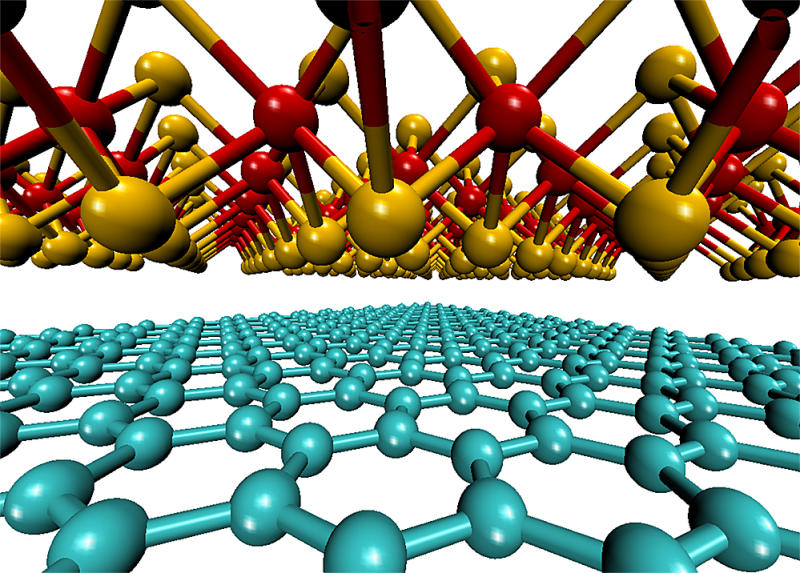 “The MIT team found that an effective solar cell could be made from a stack of two one-molecule-thick materials: Graphene (a one-atom-thick sheet of carbon atoms, shown at bottom in blue) and molybdenum disulfide (above, with molybdenum atoms shown in red and sulfur in yellow). The two sheets together are thousands of times thinner than conventional silicon solar cells.”
Image Credit: Jeffrey Grossman and Marco Bernardi

Such extremely thin and lightweight solar cells have the potential to greatly surpass “any substance other than reactor-grade uranium” with regard to the energy produced per pound of material. According to the researchers, such solar cells could be created by utilizing stacked sheets of one-molecule-thick materials such as graphene or molybdenum disulfide.

The new approach “pushes towards the ultimate power conversion possible from a material” with regard to solar energy,” according to Jeffrey Grossman, the Carl Richard Soderberg Associate Professor of Power Engineering at MIT, and senior author of the new study.

The researchers say that even utilizing just a single bilayer of two-dimensional materials — such as graphene, molybdenum disulfide, molybdenum diselenide, etc — it’s possible to create solar cells with efficiencies of 1-2%. While that may not sound like much at first when compared to conventional solar cells, when you consider the resources, time, and materials that go into making conventional solar cells (as well as the space they take up and their weight) and compare that to a solar cell that is thousands of times lighter, uses considerably less material, and is lighter than tissue paper… the appeal of the technology becomes obvious. As of now, the two-layer solar cell design is about 1 nanometer thick — hundreds of thousands of times thinner than a conventional silicon solar cell.

Potential applications in the aviation and space industries immediately come to mind — or really anywhere weight is a significant factor.

It’s worth noting that by stacking together more than just two layers of the two-dimensional materials that the efficiency could likely be raised significantly.

“Stacking a few layers could allow for higher efficiency, one that competes with other well-established solar cell technologies,” says Marco Bernardi, a postdoc in MIT’s Department of Materials Science, and lead author of the research paper.

“Pound for pound the new solar cells produce up to 1,000 times more power than conventional photovoltaics. At about one nanometer (billionth of a meter) in thickness, it’s 20 to 50 times thinner than the thinnest solar cell that can be made today,” Grossman adds. “You couldn’t make a solar cell any thinner.”

“In addition, the material itself is much less expensive than the highly purified silicon used for standard solar cells — and because the sheets are so thin, they require only minuscule amounts of the raw materials.” And the material itself is also very robust, even in open air — “it’s essentially stable in air, under ultraviolet light, and in moisture,” Grossman states.

While all of this already looks very promising, there’s actually still a great deal of unexplored potential, as the materials used — molybdenum disulfide and molybdenum diselenide — are just two in a universe of 2-D materials. “There’s a whole zoo of these materials that can be explored,” Grossman states. “My hope is that this work sets the stage for people to think about these materials in a new way.”

As is nearly always the case with this type of research, though, there are still roadblocks to be passed before this technology can be widely used — as of now, there are no methods for the large-scale production of molybdenum disulfide and molybdenum diselenide.

The researchers will now be working on the development of a prototype of the solar cell.

The new research was just published in the journal Nano Letters.

Household PV Systems Are Exempt From Consumption Tax (VAT), According To European Court Of Justice