South Carolina has lagged behind other states in bringing solar power to the state. Currently, it only has only about 11 megawatts of solar power, enough for just 1,000 homes. But thanks to the efforts of non-profit organization SmartPower, that is about to change. 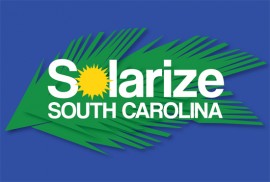 “New policies within the state have made it more attractive,” SmartPower president Brian Keane told Solar Energy recently. He was referring to legislation passed in June 2014 that gave the green light to third-party leasing and required investor-owned utilities such as Duke Energy and South Carolina Energy & Gas to increase their distributed energy resources. The utilities will also pay businesses and residents that are producing their own renewable energy. “There’s enough changes happening for it to make financial sense for consumers to go solar,” Keane said.

The solarize model has been followed successfully in Portland, Seattle, Asheville and Raleigh. The difference in South Carolina is that this is the first time a public utility has agreed to a participant in the program.

The program focuses on outreach activities to educate potential solar customers about the benefits of renewable energy. It will offer information and advice at community events such as farmer’s markets, book clubs and civic organization meetings. “We’re basically going where the people are,” Keane says. “I believe that there’s this pent-up demand for those who want to go solar.”

Keane understands that there are still challenges for residential solar, despite increased public awareness of the technology. “It’s getting people to walk that last mile from awareness to installation,” he said. “You just don’t walk into a store and get solar. But we’re bringing the solar store to you.”