At least three major renewable energy developers in India are looking to buy the seven solar power projects awarded to SkyPower Global as the Canadian company plans to exit the highly competitive market. 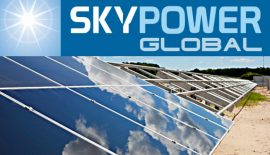 We had earlier reported the problems SkyPower has been facing with one of the solar power projects in Madhya Pradesh. The company failed to commission the project by the deadline of January 2017 due to lack of enough land for the project.

The state government-owned company that was supposed to acquire power from the project refused to sign a power purchase agreement for the project and instead encashed the bank guarantee pledged by SkyPower.

SkyPower has challenged these developments in a court.

All seven projects were secured at the lowest solar power tariffs at that time. Media reports suggest that the built quality of the projects is very good, which has attracted the likes of ReNew Power, Greenko Energy, and Hero Future Energies. The plants are being constructed by Sterling & Wilson, which has also commissioned projects in the Middle East and Northern Africa.

While ReNew Power and Greenko Energy have the backing of major international investors, Hero Future Energies is part of a major Indian industrial conglomerate — Hero Group.

Greenko Energy acquired 1,300 megawatts of capacity awarded to SunEdison India after the latter’s bankruptcy. ReNew Power has also been looking at several potential acquisitions as it preps for its initial public offering. Hero Future Energies has been participating actively in several competitive auctions and would like to increase capacity under management.