Herman Trabish of Greentech Media has happened across a pretty interesting find — 97% of new electricity generation capacity in line to be added to the California grid in the second half (2H) of 2012 is from solar power projects.

This is according to the California Independent System Operator (the ISO), as published in the 2012 Annual Report on Market Issues and Performance. In total, 1,633 megawatts of generation capacity are in line to be added to the grid in 2H 2013. A whopping 1,581 megawatts (MW) are from solar projects. 52 MW are from biomass projects. 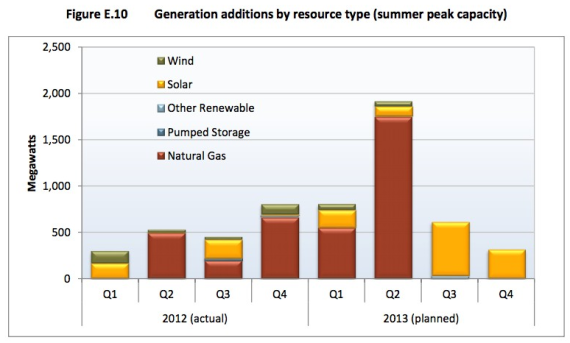 Herman spent a lot of time discussing various factors related to natural gas in his post (I’d recommend checking it out). A few key points I’d pull out of it are as follows (images added): I think the overall trend is pretty clear. Solar power is growing fast, and it will continue growing at a strong pace. Beyond that, the specifics of California’s future grid are not entirely clear.

Solar still needs a lot of support to reach its potential, especially rooftop solar. And making sure that what fills in around solar as it grows is also clean and renewable is a complementary challenge on which we need to put a strong focus.

The whole California ISO report looks like it’s worth a read, but at 231 pages, it could take several hours (or even days) to go through it all. For now, here are a handful of interesting charts and graphs I’ve pulled out of it: