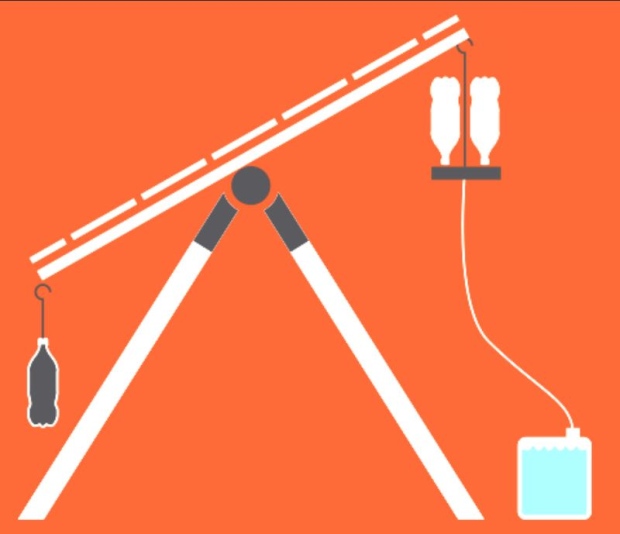 Three Canadian entrepreneurs are bringing solar power to communities around the world that have no lights for their homes, their schools, or their hospitals.

Eden Full, originally from Calgary, is the inventor of the SunSaluter, a mechanical device that is both simple and powerful. The SunSaluter is a solar panel that rotates on its base. In the morning, a person pours 4 liters of water into bottles hanging from one side. A counterweight is attached to the opposite side

During the day, the water drips through a filtration system that makes it safe to drink. As the bottles empty, the counterweight pulls down on the other side of the solar panel, keeping it pointed toward the sun as it makes its way across the sky. That allows the solar panel to generate 40% more electricity than if it was mounted in a fixed position.

Full started SunSaluter in 2006. Today, her devices are in use in 16 countries around the world. She is an engineering student at Princeton and has won the Forbes Top 30 Under 30 award three times.

Regina’s Jason Gray cofounded SunFarmer in 2013 with partner Andy Moon to help bring affordable solar energy to developing countries. Their model seeks to overcome the high initial cost of solar power systems by offering customers zero-interest loans for 5, 10, or 15 years. The loans are funded by donations.

SunFarmer builds solar power installations for community institutions like schools and hospitals around the world. Because customers don’t own the system until the loan is paid, they have an incentive to make sure they take good care of the equipment. SunFarmer also has an incentive to maintain the system properly during the term of the loan.

Once the customer has paid for the project in full, SunFarmer recycles the money into a new installation. It intends to power 4,000 hospitals, schools, and water projects by 2020. Right now, SunFarmer is ramping up efforts to help people affected by the recent earthquake in Nepal. The company maintains an office in Katmandu.

Ontario native Adam Camenzuli cofounded KARIBU Solar Power with a similar goal: to bring affordable modular solar lamps to more than a half billion African villagers who live without electricity.

Camenzuli and four others created a modular lamp made up of a solar panel, rechargeable battery and mobile phone charger, and light. They made it as an alternative to dangerous kerosene lamps that can cause burning, child poisoning, poor visual health, and indoor air pollution.

The company uses a rent-to-own model. Customers rent the battery and light from a shopkeeper for a daily fee. They recharge their battery using the shop’s solar panel. Once a customer pays enough times for the battery rental, they own the panel.

The Power Of Power

While Elon Musk is busy adding to his personal fortune, these young entrepreneurs are putting all their effort into bringing the benefits of electricity to those who have never had any. Doing so means hospitals that operate by candle light will now have well-lit operating facilities. Students who now read by kerosene lamps can study at night without breathing toxic fumes.

Electricity is also essential to unlocking the power of the internet. Which of these people will use that power of to create more new ways to benefit mankind? The possibilities are endless, thanks to a handful of dedicated entrepreneurs. Well done!