Entrepreneurs in China, South Korea, Russia, and Japan have signed a Memorandum of Understanding that seeks to create the Asia Super Grid. It will transmit electrical power from renewable sources from areas of the world that are best able to produce it to consumers in other parts of the world. The idea is dependent on development of an ultra-high voltage grid operating at more than 1,000 kilovolts AC and 800 kilovolts DC over thousands of kilometers. It envisions interconnecting grids across regions, nations, and even continents with a capacity of over 10 gigawatts. 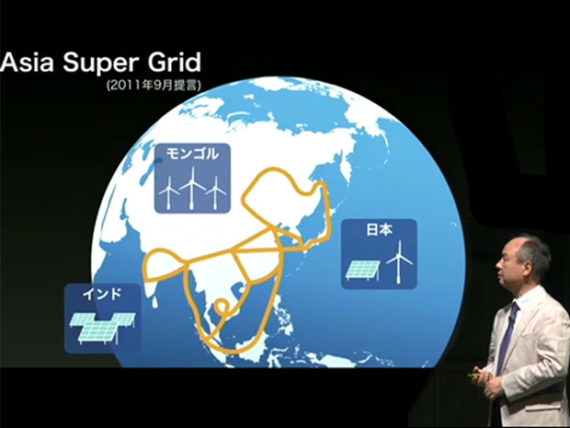 The concept is the result of an idea by Masayoshi Son, founder and head of the telecom and Internet giant SoftBank Group. After the devastation at the Fukushima Daiichi nuclear plant following the 2011 Tohoku earthquake, Son was so shocked by events that he established the Renewable Energy Institute soon aftewards to help develop and promote renewable energy.

“I was a total layman (in renewable energy) at the time of the earthquake,” Son told an audience attending in Tokyo last Friday. But perhaps his lack of technical knowledge is what allowed him to conceive of the Asia Super Grid. His idea was to tap the wind and solar energy power available in the Gobi Desert region of China, estimated to be equivalent to thousands of nuclear reactors. “People said it was crazy, too grand a scheme…politically impossible,” he added.

But soon, he had attracted interest from Korea Electric Power Company and the State Grid Corporation of China. Soon Russian power company PSJC Rosseti came on board as well. The next step in the process was the establishment of the nonprofit Global Energy Interconnection Development and Cooperation Organization in Beijing this past March. GEIDCO is led by Liu Zhenya, former chairman of State Grid. Members include the four Asia Super Grid signatories, as well as utilities, universities, and equipment manufacturers from 14 countries.

GEIDCO’s declared goal is to link the world’s electric grids to meet global power needs by generating electricity from renewables. At Friday’s symposium in Tokyo, Zhenya outlined this vision, saying global energy interconnection (GEI) based on clean energy was the only feasible answer to issues of resource constraints, environmental pollution, and climate change.

The challenge for GEI, he noted, was connecting the world’s alternative energy resources of wind, hydro, and solar to the areas of demand. Such energy sources are available in a band arcing from North Africa through central Asia to eastern Russia and North Asia. But the closest areas of demand are in Europe, southern Africa, and East and Southeast Asia. And because “wind and solar power are random, intermittent, and volatile,” noted Zhenya, “only by integrating them into a vast power grid can they enjoy better development.”

He describes GEI as a globally interconnected smart grid using UHV grids as the backbone, with an infrastructure platform on which clean energy can be developed, transmitted, and used worldwide. Nine regional interconnected grids are already functioning within China, so the technical feasibility of transmitting electricity across long distances at high voltages has already been proven.

More nettlesome are the political cross-currents that still reverberate through Asia, echoes of the Second World War that saw Korea and China victims of a brutal and repressive occupation by Japanese troops. Today, the three nations still have unsettled claims involving several offshore islands.

Japan has its own unique technical challenges. For long forgotten historical reasons, half of the nation operates on 50 hertz alternating current while the other half uses 60 hertz current. The split makes it nearly impossible to interconnect the generating facilities in each section. “After one hundred years, there is no way we can change this,” said Ryuichi Yokoyama, professor emeritus of Waseda University, in Tokyo, who spoke at the Tokyo symposium. “We are divided into two zones, which is unprecedented in the world. So nationwide operation is merely a dream,” he said.

Meanwhile, the price of wind and solar power is falling rapidly. Zhenya said recent PV bid prices for projects in the United Arab Emirates and Chile were as low as 3 U.S. cents per kilowatt-hour. Consequently, “according to our calculations, the cost efficiency (of wind and solar generation) will be more than fossil fuel energy by 2025,” he predicted. The next step, said Zhenya, is to study the technology challenges involved with developing and laying submarine cables to speed up implementation of Northeast Asia interconnections.

Zhenya ended his talk on an upbeat note, saying that with wisdom and an open mind, GEI can be achieved by 2050 as the way to transition to sustainable, low-carbon energy that will benefit everyone. The technology exists. All that remains is finding the political will to make it happen. Perhaps the urgency of the need to stop filling the atmosphere with deadly carbon pollutants will help spur a sense of renewed understanding and cooperation among the nations of the world.