This, according to new research published by GTM Research today in its Global PV Manufacturing Attractive Index 2015 (PVMAX), which ranks the world’s most attractive countries in which to manufacturer solar PV modules. 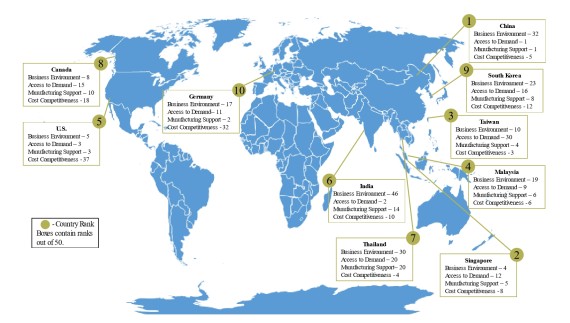 “The U.S. is a very attractive country for manufacturing and ranks higher than any other highcost country because of its robust domestic demand and access to markets globally,” said Mohit Anand, report author and GTM Research Senior Solar Analyst. “The report notes that close to 10 percent of new module manufacturing capacity announcements this year has been for plants located in the U.S. “Anything that helps grow domestic demand, including an extension of the federal Investment Tax Credit, would further support U.S. attractiveness to manufacturers.”

Following several years of a persistent oversupply of solar PV modules, the market is finally returning to a more stable supply situation thanks to two separate factors identified by GTM researchers: First, consolidation and facility closures have tightened supplies; and second, global PV demand is expected to increase over the following five years.

In fact, GTM Research predicts that solar PV demand will reach 135 GW in 2020.

This could in fact lead to a “supply crunch” by the end of the decade, as demand ramps up high enough to put a healthy strain on the supply of solar PV modules. Specifically, GTM Research is predicting an excess module capacity of only 26%, where an excess capacity between 30% and 70% would be more ideal. 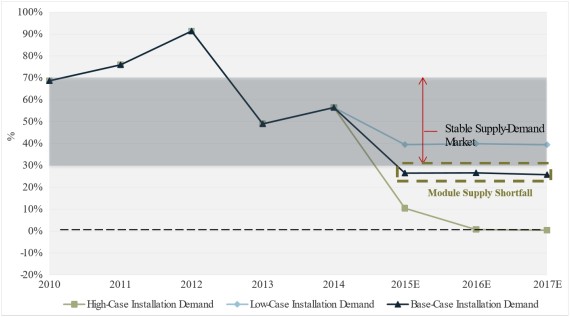 China Has Added 9.9 GW Of Solar PV So Far This Year