The days when solar power was more expensive than other power sources are quickly passing us by. News out of Europe is that commercial solar power is now at grid parity in some major European countries.

“In countries such as Italy and Germany, both at grid parity and with proper regulation, PV systems for self-consumption represent a viable, cost-effective, and sustainable power generation alternative,” said David Pérez, partner at Eclareon in charge of the study. 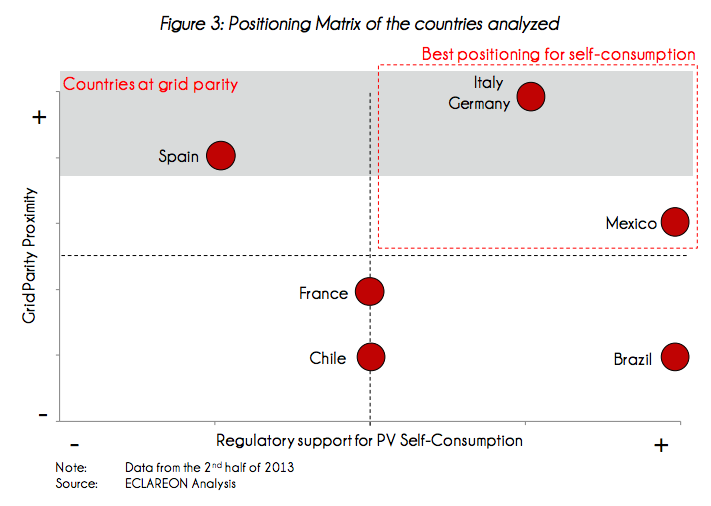 As you can see in the chart above, of the 7 countries studied, 4 are yet to hit commercial solar grid parity. Of them, Mexico certainly looks the best-positioned to hit it next, and France seems to be next in line after that.

You can also see large variation in the solar policies of these countries. For example, Spain is infamous now for its retroactive solar feed-in tariff cuts. It has also made it illegal for people to consume electricity they generate from their own solar panels.

Italy and Germany, on the other hand, have largely cut solar feed-in tariffs as initially scheduled. Overall, their solar policies have been much more stable. They also have policies supporting the adoption of energy storage, which is a good supplement to rooftop solar, especially if costs can be brought down as they were with solar panels.

Of course, Brazil and Mexico are seen as having the most supportive policies for solar PV electricity self-consumption.

Notably, LCOE for commercial solar power has been coming down in all 7 countries a great deal, but, as might be expected, they’ve been coming down slowest in the countries already at grid parity, which have more mature solar PV markets and have less incentive to further cut prices: 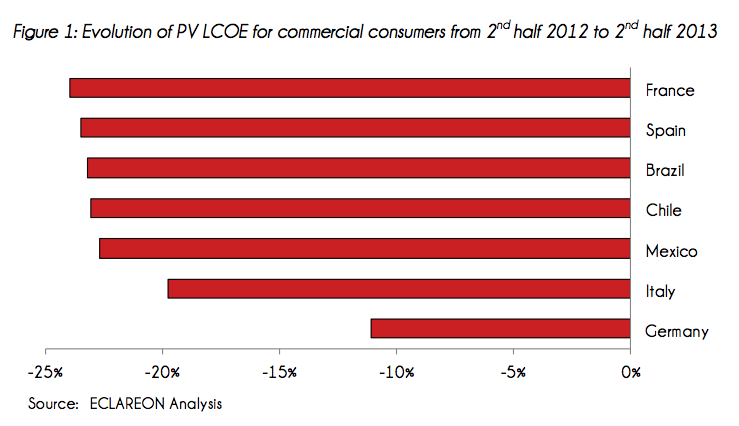 This was the first commercial solar grid parity monitor from Eclareon. I’ll keep you up to date with changes in the coming ones.