Varun Sivaram, Samuel Stranks, and Henry Snaith have written an article for Scientific American about the wonders of perovskite solar cells, which are capable of stunning achievements in the laboratory. Sivaram says, ” [M]any of us believe this is the field’s biggest breakthrough since the original invention of the solar cell sixty years ago.” Why is that? 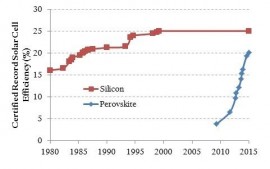 According to Vox, “In the future, solar power won’t just come from bulky blue panels on rooftops. The solar panels of tomorrow will be transparent, lightweight, flexible, and ultra-efficient. We’ll be able to coat shingles or skylights or windows with them — and it’ll all be as cheap as putting up wallpaper.” One principal advantage they have over conventional solar technology is that they can be engineered to react to many different wavelengths of light. That lets them convert more of the sunlight that strikes them into electricity.

Wow! That is some pretty exciting stuff. Why don’t we have perovskite solar panels right now? One answer is, there is often a huge difference between performance in the lab and performance in the real world. Another thing is that many perovskite solar cells use lead as a principal ingredient. And they deteriorate rapidly in the presence of moisture. Silicon solar cells may be clunky, but they last 25 years or more.

Sivaram says that very few scientists are working on solutions to these problems. Instead, they are devoting their efforts to establishing new solar cell efficiency records in the lab. Why? Because new records make for good headlines and headlines are what get their scholarly articles published in leading scientific journals. Basic research goes largely unreported because it’s not sexy enough. If you are a scientist today, your number one priority is getting published. Applied research just has to wait.

Another phenomenon Sivaram talks to Vox about is what he calls the barrier vs bridge dilemma. Current technology can act as a bridge to new technology or as a barrier to its acceptance. One barrier is that manufacturers have invested billions to create the factories that make silicon-based solar panels, and they need time to recoup their investments.

He explains it this way: “As silicon-focused companies scale up their manufacturing operations and create economies of scale, it becomes even more difficult for smaller competitors without scale to enter the market — even if they have a technology that, down the road, could have far superior cost and performance.”

Sivaram suggests that lithium-ion batteries may be another example of technology that presents a barrier to more sophisticated batteries currently under development. The investment required to build a lithium-ion factory — like the $5 billion Tesla is investing in its Gigafactory outside Reno — will take decades to amortize. Until then, manufacturers have a strong incentive not to make it easy for new technologies to gain a foothold in the marketplace.

New technology has to bridge two so-called “Valleys of Death” during the development cycle before it reaches market viability. Sivaram thinks the proper role of government is to provide a bridge for those perilous times.

“Then there’s enabling the bridge, which can be done by addressing the two valleys of death for new technologies. The first valley of death is basic research and protoyping. Public support for R&D is just a slam dunk. The other is demonstration support, which is crucial. The government fills the gap where private investors are too risk-averse — from scaling the technology up from a prototype to pilot scale to factory scale. And that involves making some pretty large and risky investments.”

He uses the recent example of Solyndra, a solar panel maker that burned through a half-billion-dollar government loan and then went bankrupt. He thinks that money would have been better spent if it was parceled out in smaller amounts to 10 companies pursuing new technology solutions. He adds that 80% of the money allocated by the US Department of Energy today for solar panel research is funding efforts to improve existing silicon solar panels. Only 20% is being used to promote research on new technology like perovskites. He would like to see that ratio reversed.

Pubic policy also has a direct impact on the electrical energy industry. Monopoly models that worked well for 100 years may now be acting as barriers to innovation. Perhaps a re-examination of that policy is in order. The biggest problem is that conventional utility companies have trillions of dollars invested in generating plants and grid infrastructure. They are not going to simply write that investment off. Any plan to reorganize the energy marketplace will have to offer a solution to that thorny problem.

Taken all together, there are a number of factors conspiring to delay or derail new technology, even though it may be orders of magnitude more cost effective and efficient. Are perovskites the answer to man’s quest for abundant, affordable renewable energy? It’s going to take a lot of people working together in both the public and private sectors to find out.

Note: Varun Sivaram is now the Douglas Dillon Fellow at the Council on Foreign Relations.