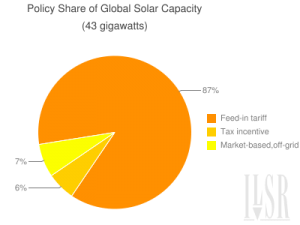 The results of the study were apparently a big disappointment or frustration to the EU’s Energy Commissioner, Günther Oettinger, and German politician Herbert Reul, both of whom have been pushing for Germany to switch its feed-in tariff system over the the quota system (also known as a Renewable Energy Standard or Renewable Portfolio Standard in the US).

The results of the study should shut down a push for a Europe-wide renewable energy quota system. However, an EU Parliament vote on the report has not yet occurred — that is projected to come on April 15.