Financing Is The Key To Residential Solar Power

A new report from GTM Research entitled US Residential Solar Financing 2015-2020 finds that financing is the key to residential solar power proliferation.

Of the 1.2 gigawatts of residential solar installed in the US last year, 72% was third party owned (TPO) and enabled via leases and power purchase agreements (PPAs). The remainder was directly owned by the customer, much of it through loans.

Leases and PPAs are often confused but they are not the same thing. According to Clean Energy, in a solar lease, a homeowner is leasing the solar equipment on their home and making monthly payments for the use of that solar system. In a PPA, the homeowner is purchasing the power generated by the solar equipment installed on their roof, but is not making any sort of payment for the equipment itself, only the electricity being generated. In both cases, the cost of the system is partially or completely offset by the savings the homeowner realizes from purchasing less electricity directly from the local utility company.

The US residential market segment has grown 15 of the last 16 quarters, and that’s largely due to financing solutions like leases. Since TPO took off a few years ago, the offerings have given customers across many demographics and socioeconomic categories the ability to afford a solar installation.

According to the report, three companies financed 56% of all US residential solar installations in 2014. SolarCity led the nation with 34%, followed by Vivint Solar’s 12% and Sunrun’s 10%. Other leading finance providers included SunPower, NRG Home Solar, Sunnova, and Clean Power Finance. 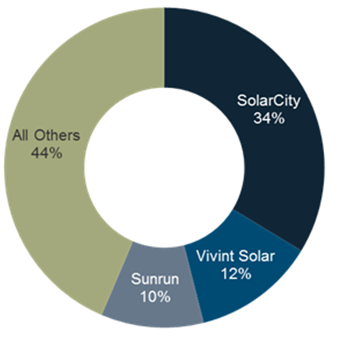 “The solar loan market has exploded,” said Senior Solar Analyst Nicole Litvak. “Every TPO financier has introduced or is planning to introduce a loan, and an entirely separate group of pure play loan providers has emerged. Many of these new loans are structured such that they offer customers the same year-one savings as a lease or PPA.”

The data show that having multiple choices about how to go solar plays a big role in the widespread adoption of solar technologies across the country. Different communities and families have different financial needs and preferences, so having a variety of financing choices will increase their ability to go solar, whether through a direct purchase, loan, lease, or PPA. More choices equals more solar.

As more solar is installed, the volume of installations helps lower the cost further, thus leading to the increase in customer owner systems that is expected in the next few years. As the residential solar market matures, banks and other traditional lenders will be less skittish about making loans for home solar systems.

The report signals big changes ahead in the residential solar market. In-home battery storage options will proliferate over the next 5 years as well, giving homeowners even more options for generating their own electricity and relying less on traditional utility companies.