In 2009, Wandee Khunchornyakong, an enterprising woman in Thailand, wanted to find out how to add renewable solar power to her local electrical grid. She went to a government office to find out more information. There, she found permits for solar installations just begging for people to take advantage of them. She picked one up but a government clerk told her, “Please, take more. No one wants them.” So she did. When she left the office, she took almost three dozen solar permits with her.

Having permits is one thing. Finding the money to build solar power installations is quite another. She was turned down for financing by local banks repeatedly. 7 years ago, Thailand had almost no solar power. The technology was new and untested. Traditional lenders were afraid to invest in something they knew little about.

Undaunted, Khunchornyakong made contact with International Finance Corporation, an arm of the World Bank. IFC recognized the power of her dream of bringing renewable energy to the sunny, rural areas of northeast Thailand and agreed to provide the financing she needed to get started. 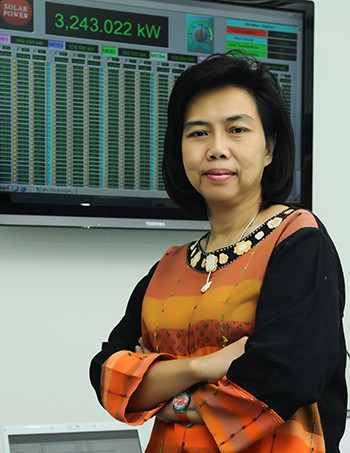 Beginning in 2010, IFC invested $15.8 million in Solar Power Company, the company started by Khunchornyakong. The money was used to construct 3 solar farms with a capacity of 18 megawatts. That investment sent a powerful signal to other lenders, who soon agreed to provide another $800 million in financing. By 2014, Solar Power Company had 36 solar installations with a combined capacity of 260 megawatts.

Thailand generates most of its electricity by burning natural gas. It is anxious to transition away from using fossil fuels and increase the amount of energy it gets from renewable sources. Today, the private sector is promising to invest $2 billion in solar power over the next 5 years. Thailand plans to increase solar energy production to 6,000 megawatts by 2036. That would represent 9% of its total electricity needs, compared with just 4% in 2014.

Since 2010, Solar Power Corporation has created 20,000 local jobs and is one of the largest providers of solar power in Thailand. It is now contemplating expansion into Myanmar and the Philippines.

For her role in bringing solar power to Thailand, Wandee Khunchornyakong was awarded the 2014 United Nations’ Momentum for Change award for her innovative efforts to address both the climate change and wider economic, social, and environmental challenges. She hopes her efforts will encourage other nations to consider investing in solar power to transform their societies by using clean renewable solar power instead of fossil fuels for their electrical needs.