Leading US solar manufacturer First Solar published its first-quarter earnings report late last month, depicting a strong start to the year with increased sales of $567 million and the commencement of Series 6 module production in April which, in turn, led to the company’s announcement of a new solar manufacturing plant in Perrysburg, Ohio. 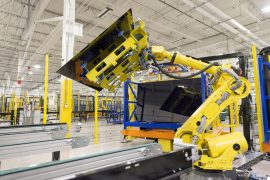 First Solar announced its first-quarter earnings to the world on April 26 at the same time as it announced plans to build a new 1.2 gigawatt (GW) solar module manufacturing facility in Perrysburg, Ohio, which is expected to create 500 jobs and will focus on producing the company’s Series 6 thin film photovoltaic module — and which was heralded earlier in the year by company CEO Mark Widmar. The news is unsurprising given US President Donald Trump’s January decision to impose a 30% tariff on all imported solar cells and modules, refocusing solar manufacturers wanting to do business in the United States and incentivizing local manufacturing.

“Strong demand in the US for advanced solar technology, along with recent changes in US corporate tax policies, have encouraged our decision to grow First Solar’s US production operations,” said Mike Koralewski, First Solar’s Senior Vice President of Global Manufacturing. “State and local officials and JobsOhio have also worked with us to create a business-friendly environment that supported our objectives. These factors, combined with our own economies of scale in high tech manufacturing, make expanding US operations an attractive, win-win opportunity.”

While the new solar tariff is definitely playing its part in First Solar’s decision — and the decisions of other companies, such as JinkoSolar’s newly announced Florida manufacturing facility and SunPower’s decision to acquire SolarWorld Americas’ US-based operations — it was solidified in the success of its new Series 6 solar product. Year-to-date bookings for Series 6 modules has already reached 3.3 GW and the company also began shipping Series 6 modules in the first quarter.

“Our first quarter earnings and continued bookings momentum provide a positive start to the year,” said Mark Widmar. “Our earnings for the quarter were supported by the sale of both domestic and international projects, combined with efficient management of core operating expenses. Customer demand for our Series 6 product continues to be strong as evidenced by our year-to-date net bookings of 3.3GWDC.

“We also achieved significant technology milestones this month with the start of Series 6 production in Ohio and the first commercial module shipments to systems projects. We remain focused on leveraging the advantages of our differentiated technology and applying our disciplined operating approach to achieve our near-term and long-term priorities.”

For the first quarter, First Solar reported earnings of $567 million, up $228 million on the previous quarter but well down on the spectacular $892 million reported in the first quarter of 2017. The increase in first-quarter sales was due primarily to the sale of international projects in India and Japan, as well as the sale of the company’s Rosamond project.

Earnings per share for the first quarter (on a GAAP basis) amounted to $0.78 compared to a loss per share of $4.14 in the fourth quarter, and $0.09 in the first quarter of 2017, and beating out analyst expectations by an impressive $0.85. Gross profit margin was 30.5% for the quarter, while the company’s cash and marketable securities declined slightly from $3 billion at the end of 2017 to $2.9 billion due to an increase in capital spending for additional Series 6 capacity.

First Solar barely modified its 2018 guidance, only shifting its Net Cash Balance down to between $2 billion and $2.2 billion, dropping its Operating Cash Flow down to between $0 and $100 million, and increasing its Capital Expenditures up to between $850 million to $950 million.