You probably remembering hearing a couple of months ago about a new first-of-its-kind program to train veterans for jobs in the solar energy industry, while at military installations.

That pilot program recently saw the first wave of graduates at Camp Pendleton in San Diego, California — all 20 of which have now been offered jobs by the residential solar leasing and installation company Vivint Solar, according to a recent announcement by the company. 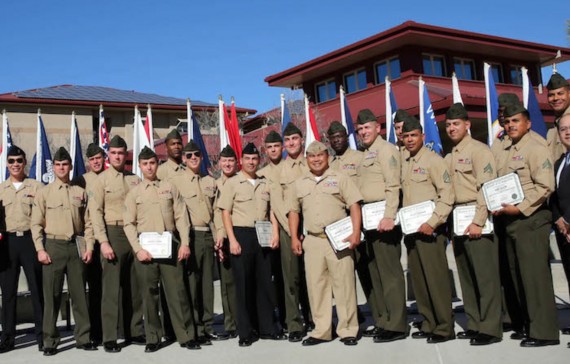 While Vivint Solar was the only company to hire any of the graduates from this first class, SunEdison, SolarCity, SunPower, and Sunrun have all also signed on to interview graduates of the program — representing some of the top solar companies in the country.

The training being given via the program is as part of a partnership with the Department of Energy’s Sunshot Initiative — which is designed, at least in part, to spur growth in the solar energy industry in the US.

Altogether, the two partners have set the rather ambitious goal of training 50,000 new workers for the solar industry by 2020. It’s not exactly clear what portion of this number is planned to be veterans — presumably, a substantial portion, though, I’d think. After all, it’s a great solution to multiple problems — veteran unemployment and a shortage of skilled solar workers.

The program is training up for a variety of different skills/positions, including: solar installation, sales, and system maintenance/inspection.

As it stands currently, roughly 1 in every 10 workers in US solar energy industry is a veteran. That figure seems likely to continue growing thanks to programs such as these.