Airplane technology made tremendous strides forward in the decades after the Wright Brothers made their historic visit to Kitty Hawk. Then came the jet engine and everything changed. Solar panel technology has made extraordinary strides forward in the past 3 decades but Giant Leap Solar says a breakthrough in concentrated solar power is just around the corner. Once again, nothing will ever be the same. 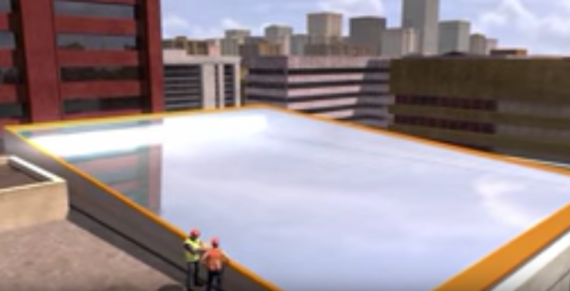 The company claims its Granite Glass will slash the cost of concentrated solar by 90% while needing only one tenth as much space. Granite Glass could do for renewable power what the jet engine did for aeronautics. Developed in collaboration with Lawrence Livermore National Laboratory, Granite Glass is 3D printed with tiny fluid filled passageways about the size of capillaries.

The amount and position of fluid can be digitally controlled to make embedded mirrors become visible or invisible, allowing them to redirect sunlight onto solar receivers. The process is similar to traditional concentrated solar power but on a much smaller scale.

On its website, Giant Leap says, “This has the potential to completely replace heliostats and parabolic trough concentrators, which are used in today’s utility-scale and small-scale solar power plants. This work, supported by the Energy Department SunShot Initiative and in partnership with Lawrence Livermore National Laboratory, will finally bring solar energy into the digital age and provide amazing new capabilities and cost reductions to both photovoltaic and solar thermal power plants.”

Giant Leap has just begun an investment campaign at Fundable.com. It seeks to raise $500,000 from qualified investors in order to qualify for an additional  $2.2 million cooperative SunShot research and development award from the US Department of Energy.

If you don’t know, a “qualified investor” is someone who has had an annual income of at least $200,000 in each of the past two years ($300,000 for joint income) or a net worth of at least $1 million. Expect Donald Trump to not only shut down the SunShot program but also any renewable energy research at national laboratories.

The Digital Solar Age may be just around the corner, if Trump doesn’t find a way to kill it.