Giant UFOs Are Stealing Solar Power From The Sun!

If you check your calendar today, you might be excused if you thought today is April Fool’s Day after reading this story. Almost as hard as the election of Donald Trump is to believe, this report from the lunatic fringe is even more difficult to give credence to. The UFO hunter known as Streetcap1 on YouTube is putting forth the theory that giant UFOs are draining solar energy from the sun. 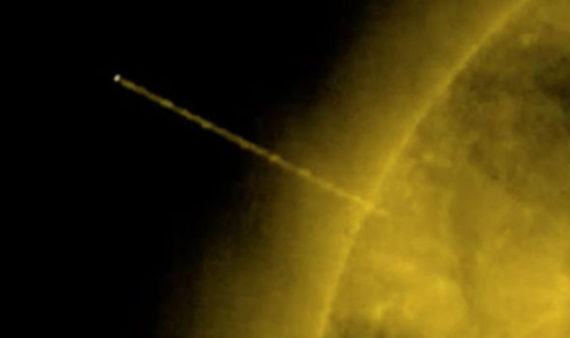 The proof, Streetcap1 says, is a line of “plasma” running from the sun to a strange object seen in a telescopic photo of the sun taken by NASA. “Is this a massive UFO feeding off sun energy?” he asked on his YouTube channel. “The fact that the UFO is a different color and shape to the rest of the connected line is what convinced me to upload this,” he explains. “I was not a great believer in this plasma sun energy theory, but this has got me thinking.”

UFO blogger Scott C Waring picked up on the video and said, “This UFO shot out of the sun yesterday but was seen by Streetcap1 of Youtube. The UFO may have been using the suns energy to fuel itself or to recharge in some way, but it’s leaving at high speed. Notice that the UFO is a glowing white, but the sun’s plasma is a yellow. This tells us the craft is made from a different material than the sun’s surface.”

Later, Mr Waring posted his own NASA image taken by the Solar and Heliospheric Observatory (SOHO), a spacecraft with telescopic camera sent to image the sun and beam back high detail images. He says it shows huge UFOs orbiting the sun. On his website ufosightingsdaily.com, a post entitled ‘Hundreds of Giant UFOs Orbiting Our Sun, NASA/SOHO Images Confirm’, Waring suggested the UFOs are as big as the Earth in some cases.

“Now please know,” he adds, “the UFOs in each photo are different because the sun is rotating, and there are a lot of moon size and earth size UFOs around our sun. Back about 10 years ago, two Russian scientists announced that they have found hundreds of UFOs orbiting Earth’s sun at any given moment in time. And that these UFOs can increase and decrease speeds for no reason, and that they can make sudden right turns at speeds that should be impossible, especially for a moon size UFO.”

Waring asks rhetorically, “Now, are these unmanned giant drones sent to get energy for planets far away? I would say yes, but they don’t have to be unmanned if their technology can protect them from the incredible heat.”

Skeptics claim the objects around the sun seen in these pictures are just coronal mass ejections from the sun – which are an unusually large release of plasma and magnetic field from the solar corona, which often follow solar flares.