Total corporate funding for the global solar sector in the year’s third quarter reached $6.2 billion, according to Mercom Capital Group.

Mercom Capital Group is one of the world’s leading energy communications and consulting firms, and releases a quarterly funding and merger & acquisition report for the solar sector, which covers venture capital (VC) funding, public market, and debt financing.

“The third quarter of 2015 has been eventful, especially in the equity markets,” said Raj Prabhu, CEO of Mercom Capital Group. “Although solar power demand continues to grow, solar stocks have made a complete U-turn in the last three months, affecting public market financing, which was down by about a billion dollars excluding IPOs.”

According to Mercom, global corporate funding was up from Q2’s $5.9 billion to $6.2 billion.

Specifically, solar downstream companies accounted for 7 of those deals, amounting to $114 million.

“With yieldcos falling out of favor, their fundraising in the public markets fell by half this quarter to $802 million,” explained Prabhu.

Debt financing grew in the third quarter, growing from $3.4 billion in Q2’15 to $4.1 billion, dominated by Chinese companies debt financing activity, which accounted for well over half with $2.9 billion.

Large-scale solar project funding grew to $2.5 billion over 23 separate deals, compared to the second quarter’s $1.9 billion over 26 deals, with the top 5 deals including the following:

Residential and commercial solar funds dropped for the first time after two record quarters of growth, down to $997 million in five separate deals, while there were 22 corporate merger & acquisition (M&A) transactions in Q3, compared to 17 in Q2 — with downstream solar companies accounting for 12 of them in the third quarter. 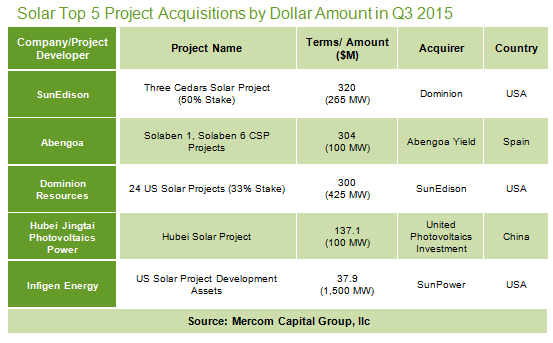