A new report from Technavio presents some fascinating insights about the global solar generator market. To start with, the annual market size in 2014 was $302 million and has been predicted to be $450 million by 2019. By the time we reach 2019, the market growth rate could be 9.20%, according to the same report. 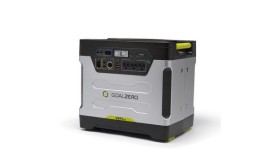 For the sake of comparison, the entire global generator market has been estimated at $16 billion for the year 2014, and could grow to $22 billion by 2019.

Some of the leading vendors in this market are Apr Energy Plc., Caterpillar Inc., Mitsubishi Heavy Industries Ltd., and Wacker Neuson S.E in Germany.

Typically, conventional generators run on diesel fuel or gasoline. The problem with this kind of process is the toxic air pollution that is produced when operating such a generator. This air pollution can be harmful to the health of humans and contributes to climate change. These options aren’t cheap, either.

The Santa Barbara County Air Pollution Control District wrote on its website, “Diesel soot, or diesel particulate, is the number one airborne carcinogen in California, and represents our state’s most significant toxic air pollution problem. California Air Resources Board estimates that operation of an uncontrolled one-megawatt diesel engine for only 250 hours per year would result in a 50 percent increase in cancer risk to residents within one city block.”

It’s a very obvious point, but the main advantage of solar power generators is that they don’t generate air pollution of any kind. So, they can’t harm human health or contribute to climate change in the way that diesel generators do. Diesel and gas generators dominate the market, just as petroleum-based fuels do in the energy markets. However, there is a global shift away from fossil fuels underway. This transition is gradual, but eventually, as the economics favor renewable energy more and more, we appear to be poised to see a reversal.

Another advantage of using solar-powered generators is that they don’t use a flammable fuel. Additionally, no handling of fuel is required, so people won’t get it on their skin or inhale noxious fumes. No fuel transporting is necessary either, so it won’t get spilled in areas near people or wild plants or animals.

Some of the top vendors of these devices are Ground Zero, Solar Stik, and Hollandia Power Systems.