Leading data and analytics company GlobalData has published new analysis this week which predicts that the global solar PV inverters market will decline from $6.3 billion in 2017 to $3.7 billion in 2022, attributed primarily to the fall in inverter prices rather than a drop in installation figures.

Fluctuations in the global solar market have been expected given the unprecedented technology cost reductions. New capacity expectations remain high, with current predictions ranging from 106 gigawatts (GW) to 113 GW. However, at the same time as experts expect global solar capacity to increase, they are similarly expecting market value to fall due to lower costs — or, in other words, we can do now do more with less money.

New analysis from GlobalData bears this out when looking specifically at the solar PV inverters market, which its analysts now expect will fall from an impressive $6.3 billion in 2017 down to $3.7 billion in 2022 — due primarily to a drop in inverter pricing. Between 2018 and 2022, GlobalData expects the solar PV inverters market to reach an aggregate value of $22.2 billion with an average annual value of $4.4 billion. Between 2017 and 2022 GlobalData expects the market to witness a negative compound annual growth rate of 10.15%.

Unsurprisingly, given China’s dominance of the global solar market, the Asia Pacific region led the solar inverters market in 2017 with a value of $3.75 billion, followed by the Americas with $1.71 billion and Europe, Middle East, and Africa combined (EMEA) with $0.89 billion. 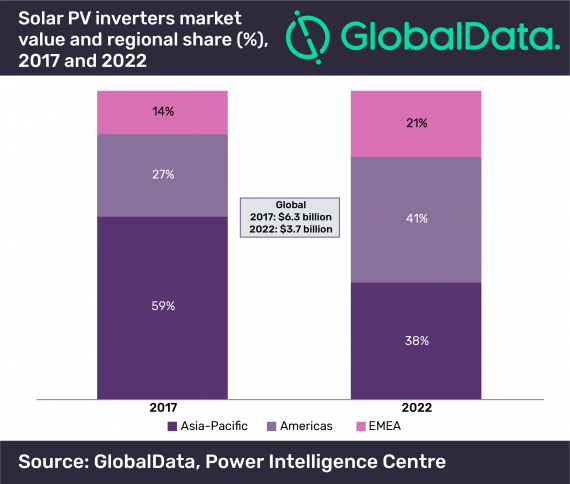 “In terms of market value, China, the US, and Japan together held over 65% and led the global solar PV inverter market in the year 2017,” explained Subha Krishnan, Power Analyst at GlobalData. “The market developments in the top countries are largely due to economies of scale, emerging inverter technologies, and policy-based government and institutional industry.”

As to why the market is expected to see such a sharp drop-off, Subha Krishnan continues: “The solar inverter and module prices have declined for a variety of reasons, including but not limited to, persistent price pressure on equipment suppliers, the anti-dumping tariffs implemented by the US on Chinese modules, the euro and yen depreciation, and the downward adjustment of the minimum import prices. In the solar PV industry, buyers are price sensitive, creating persistent price pressure on equipment suppliers.”