Shayle Kann, the director of GTM Research, is predicting the US solar industry to continue on its impressive growth streak, and to play a “meaningful role” in the future of electricity in the US.

The former Fullbright scholar, who now directs GTM Research, the market analysis, advisory and consulting division of Greentech Media, is behind the latest executive briefing from GTM Research, which investigates the future of the US solar industry. Specifically, Kann envisions solar playing “a meaningful role in the future of electricity in the US” thanks in part to fallen solar costs. 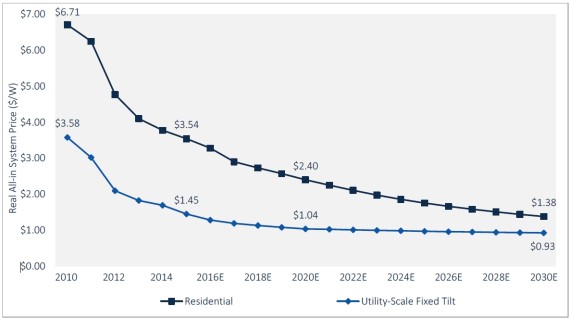 Solar PV System Price Forecast Through 2030, a slide from Shayle Kann’s presentation at the US Solar Market Insight event.

But “That path is by no means guaranteed,” Kann adds, noting that “solar faces both advantages and disadvantages as it begins to truly scale.”

Which is the driving force between Kann’s executive report, highlighting “the key forces likely to push, or impede, solar growth in the coming years” and identifying “opportunities for the solar industry to ensure its future.” The report follows a presentation Shayle Kann gave at the US Solar Market Insight event, in front of more than 400 executives from the solar industry, on November 3.