Perovskite solar cells have been getting a lot of attention for their potential to reach new heights of efficiency and new lows of cost. In the latest development, our friends over at the National Renewable Energy Laboratory have revealed a critical “bottleneck” in perovskite solar conversion that has huge implications for third-generation, super-efficient, hot-carrier solar cells. 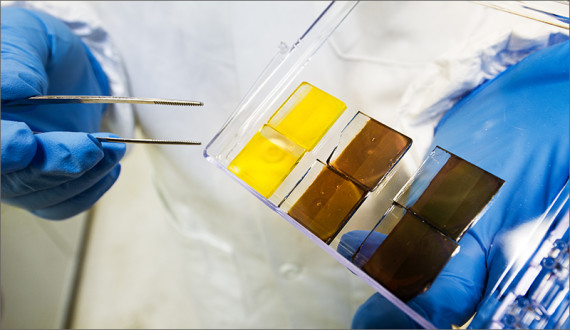 “Heat production is detrimental to the output of solar cells. It occurs when a material absorbs photons with energies larger than its bandgap. To circumvent this problem, photogenerated charge carriers must be collected through specially designed contacts that are energy-selective. Carriers with large kinetic energies—‘hot carriers’—reach these contacts before losing most of their energy as heat. In principle, efficiencies as high as 86% could be achieved.”

If that sounds too good to be true, it is. Hot-carrier solar cells are a long way from the marketplace, one big challenge is how to rev up the kinetic energy transfer to top speed (as in, subpicoseconds), in order to prevent energy loss.

Nevertheless, the high return on efficiency makes the hot-carrier field full of temptation. When SPIE covered hot-carrier solar cells back in 2011, the high mark for solar conversion was 40%, achieved by multi-junction solar cells. In December 2014, CleanTechnica took note of a new solar conversion record of 46%. Considering that the theoretical limit is about 87%, that still leaves plenty of room for alternative, “third-generation” technologies to elbow in.

So, finally, that brings us back around to the National Renewable Energy Laboratory (NREL). Just today, the lab announced that researchers have figured out a pathway for tackling the heat loss problem by deploying hot-carrier technology in perovskite solar cells.

Perovskite refers to a class of easily synthesized crystals with a structure based on a naturally occurring mineral, perovskite, that was discovered in the Ural mountains in 1839. Within recent years, researchers have been pursuing perovskites for improving solar conversion efficiency.

The commercial deployment of perovskite in solar cells faces some obstacles, with the use of lead being a particular thorny issue, but according to NREL, successive versions of perovskite solar cells have been “shooting up the efficiency charts faster than almost anything researchers have seen before,” making them juicy targets for further research, lead or no lead (for the record, tin is being explored as one alternative to lead).

When NREL began studying perovskites in 2009, it achieved a 3.8% efficiency rate. Within just a few years, the latest attempts have jumped up to more than 20%.

The new study, published in Nature Photonics under the title “Observation of a hot-phonon bottleneck in lead-iodide perovskites,” provides a pathway for pushing perovskite levels into the stratosphere, possibly as high as 66%. Here’s the rundown from the NREL media team:

“The NREL research determined that charge carriers created by absorbing sunlight by the perovskite cells encounter a bottleneck where phonons (heat carrying particles) that are emitted while the charge carriers cool cannot decay quickly enough. Instead, the phonons re-heat the charge carriers, thereby drastically slowing the cooling process and allowing the carriers to retain much more of their initial energy for much longer periods of time. This potentially allows this extra energy to be tapped off in a hot-carrier solar cell.”

According to the research team, the new study fills a critical information gap:

“Despite the earlier flurry of activity in characterizing the lead iodide perovskite system by transient absorption (TA) spectroscopy, a comprehensive and profound interpretation of the photocarrier-induced spectra is lacking. Previous work explained the TA spectra using a straightforward state-filling or Burstein–Moss model. However, a full assignment of the spectral response and the correlation between the magnitude of the TA signal and charge carrier density remains unexplored, in particular the role that excitonic transitions play in both the linear and excited-state optical and electronic properties.”

Did you get all that? Coincidentally, this morning, we just got a sneak peek at the new National Geographic–General Electric six-part series on breakthrough technology, aptly titled “Breakthrough,” which begins unspooling this Sunday, November 1. Following the reel, we got to hear from a panel of rather interesting people involved in creating the series, and one of the themes that came up was the speed at which technology is advancing, to the point where the filmmakers found themselves recording new developments practically in real time rather than simply recounting the past. Today’s revved-up world of solar cell research certainly fits the bill.

The whole series looks amazing, and of course we’re especially excited about the “Energy on the Edge” episode directed by the incredible sci-fi storyteller Akiva Goldsman. We’ll bring you some more details about that soon, including an exclusive interview with the folks at Dogfish Head (yep, these guys), a company featured in the episode.

SolarCity MyPower Loan — You Need To Understand The Fine Print