Global solar PV demand will reach 59 GW in 2015 due to rising Asian and US deployment rates, says information and analysis firm IHS.

Earlier this year, IHS published global solar demand forecasts for 2015, predicting global solar PV would grow by 30% over 2014 numbers, reaching 57 GW. Speaking at the SNEC 9th (2015) International Photovoltaic Power Generation Conference & Exhibition in Shanghai in April, IHS analysts looked to China to be the leading driver of this growth. Ash Sharma, senior research director for IHS, stated that, “for the third year running, China will be the largest end-market and the key driver of global demand in 2015.”

“China will be the largest driver of global growth, but it also presents the largest single risk to the industry’s supply-demand balance,” noted Sharma. “If the country manages to install in excess of 17 GW in 2015—which is likely—it will generate much healthier operating conditions for solar companies and a return to healthy profit margins.”

Fast-forward to October, and IHS has had to again revise its 2015 and 2016 estimates due to rising growth in the US and in China. Specifically, IHS is predicting total 2015 global solar PV demand to reach 59 GW, up 33% on 2014 figures, while 2016 is forecast to reach 65 GW, a revision of more than 2 GW up on previous IHS estimates for the year.

Two main reasons underlie the need to revise estimates, according to IHS:

“first, an acceleration of projects in the United States, ahead of the solar investment tax credit (ITC) expiration; and, second, faster growth in China, led by a likely increase in long-term government targets.” 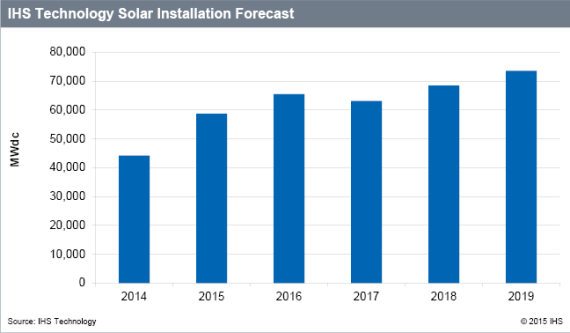 Growth in 2016 over 2015 figures is expected to drop to a reasonable 12%, and total cumulative global solar PV will surpass 300 GW, in advance of a lacklustre 2017 that will be caused, at least in part, by the likely expiration of the US production and investment tax credits.

“IHS Technology already had one of the most bullish forecasts in the industry,” said Ash Sharma, senior research director for IHS. “But due to accelerated and expanded deployment in the United States, as well as in China, India and other countries in Asia, our forecast has increased further.”