Business has been good for a Scandinavian-Germana solar module manufacturer, Innotech Solar (ITS). It’s been so good that the company is planning to do something almost no other solar module manufacturers are doing right now — step up module production. It’s looking to increase its production capacity from 60 MW to 100 MW in the near future, with a possibility of reaching 170 MW of module production capacity if market conditions continue to grow.

One of the leading drivers for this increase in production, according to Dr Thomas Hillig, vice president of module sales and marketing at ITS, is the uncertainty surrounding the possible duties that will likely be imposed on China’s modules.

The solar sector is still undergoing a process of consolidation. Many solar manufacturers are selling their photovoltaic modules below production costs, are fitting cheap components in response to price pressure and to avoid disappearing from the market completely.

We, on the other hand, are able to survive successfully in the market thanks to our innovative production process. There is also an increase in demand for our European modules, because wholesalers and project planners don’t want to risk having to pay punitive duties on Chinese modules. The insolvency of many solar companies in the last few months justifies the need for anti-dumping duties. However, they could come too late for some players. 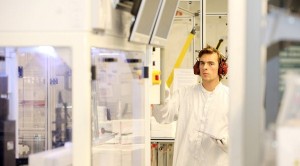 ITS is split into two operations — one in Halle an der Saale, Germany, which operates the cell optimisation facility; the second in Glava, Sweden, where the cells are then assembled into modules.

Basically, its business model is to buy cheap, low-efficiency solar cells and restore their performance to full capacity in order to keep costs low. And it only uses components supplied by European brand manufacturers.

Except for purchasing EVA from a Japan market leader, everything else is pretty much in-house. This business model has been the key to its success and has led to the new growth in module production.

“Our unique business model wins the prize for the cheapest module costs. In the last few weeks, we have attracted many new customers who appreciate the fact that our modules offer high European quality in combination with a low-carbon footprint. We are now on the lookout for more distributors in the USA, Canada and Europe.”

Innotech Solar (ITS) certainly seems like a solar module company to keep an eye on, as its future growth looks solid and it seems to have a sound business plan. I expect it to be one of the top module manufactures emerging out of the European sector.

Holds an electronic's engineering degree and is working toward a second degree in IT/web development. Enjoy's renewable energy topic's and has a passion for the environment. Part time writer and web developer, full time husband and father.