Of course, the tool doesn’t require much personal information, which might sometimes result in a less-than-perfect estimate. Nonetheless, the EnergySage Instant Solar Estimate (ISE) tool captures some of the key items and includes “sun & weather data, applicable rebates and tax credits, and your roof’s suitability to generate your estimate” just based on the address you put in (and perhaps a little drag of the red and black pin). Additionally, it uses proprietary market price data and “the industry’s leading tools and databases.”

However, there’s something else that really speeds up EnergySage ISE process — it doesn’t ask you for your name, phone number, etc — just what’s needed to estimate your solar costs and savings. The reason is that EnergySage doesn’t use this tool to collect information from you that it can use to sell you solar (as most such tools do, including the ones on this site, off of which we make some of our income). In other words, it’s a purely educational tool. (Of course, the hope is still that you would go through the EnergySage marketplace to get solar.)

The report also provides a comparison between outright cash purchase of the estimated solar system vs getting the system through a $0-down solar loan (probably the Admirals Bank solar loan that’s available nationwide, but maybe EnergySage actually has a database of these for different banks and regions). In cases where a solar lease/PPA is available, the report also includes that in the comparison. As you can see in the example above, sent along by someone at EnergySage (and quite different from my results for a home in Florida), the solar lease/PPA option fares much worse in the long term, while the upfront purchase fares the best in the long term but fares the worst (obviously) for the first 5 years or so.

In my Florida test, my electric bill was much higher (thank you, air conditioning!); my monthly and long-term savings were greater; the $0-down loan option (on a ~$500 monthly electric bill estimate) actually ended up costing me more than if I didn’t buy the system; I had no solar leasing/PPA option; and my payback time was 13½ years rather than ~5 years with the upfront cash purchase option. I haven’t paid an electric bill in Florida for about 10 years, so I actually don’t have much of a clue what my bill would actually be today, so I ran the estimate twice, using both $300/month and $500/month. In the $300/month scenario, I didn’t have the $0-down solar loan option, just the cash purchase option. The estimated payback time was also 13½ years, but the 20-year savings were $35,000 rather than $58,000. 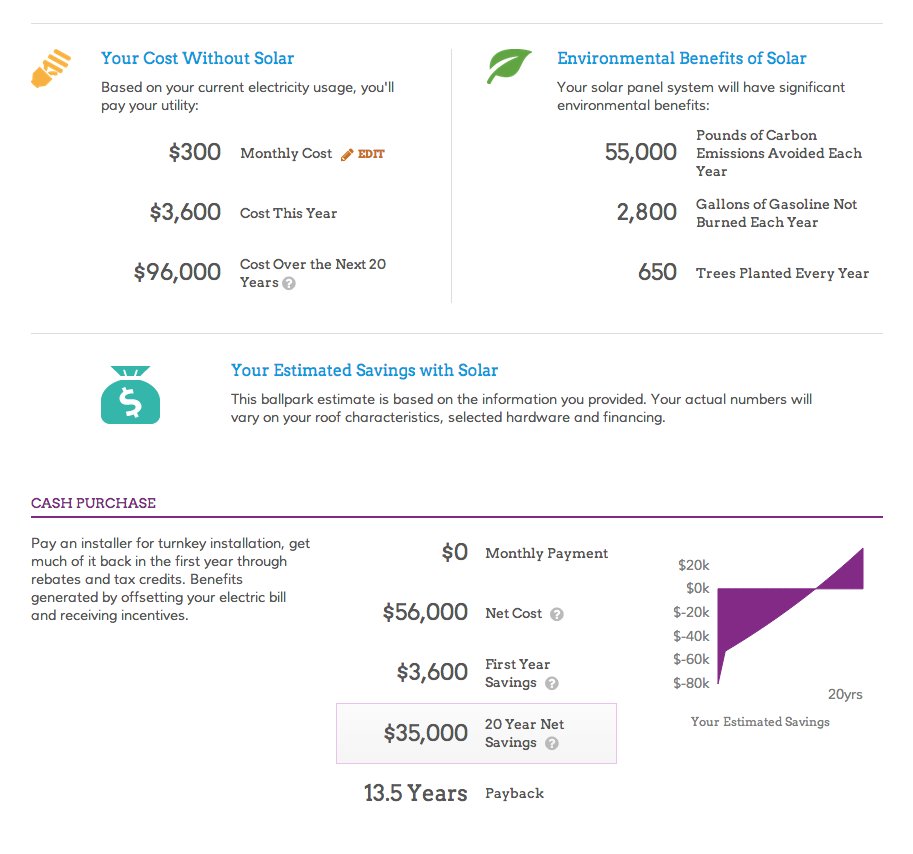 But, anyway, my point here was just to show the variation possible. Go ahead and try out the tool yourself using your best estimates!

“EnergySage’s Instant Estimate feature is a powerful consumer tool,” says CEO and Founder Vikram Aggarwal. “It instantly performs some very complex calculations to provide consumers with property-specific estimates that demonstrate the potential impact of solar power at their particular property as well as its costs. Because it happens outside the sales process, consumers feel comfortable seeking out the information they need to make an informed decision about moving forward and they don’t have to invest much time or effort to get it.”

Is Solar Leasing Your Worst Option For Going Solar?