Mitsui To Partner With Indian Company For Distributed Solar Projects

Indian solar EPC company Mahindra Susten has received a major boost in its efforts to expand its footprint in the distributed solar market with a fresh investment from a foreign company. 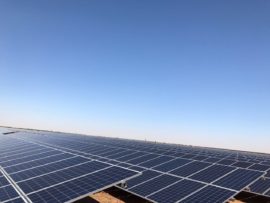 Mahindra Susten subsidiary Marvel Solren has received equity investment from Japan’s Mitsui & Co. Mahindra Susten has sold a 49% stake in Marvel Solren, which is engaged in the development of distributed solar power projects for commercial and industrial establishments in India.

Yet, many companies are looking to set up solar generation units at their premises in order to reduce dependence power from distribution utilities for supply, save on their energy bills and fulfill their Renewable Purchase Obligation (RPO).

Mitsui’s Infrastructure Projects Business Chief Operating Officer also indicated that the joint venture company may look to expand its footprint in other countries as well with the help of Mitsui’s ‘global network’. India in itself represents a huge market for companies like Marvel Solren that target corporates eager to switch to renewable energy sources. According to a recent study published by the WWF India, 69% of the top 100 companies listed at the National Stock Exchange, are already procuring renewable energy in some form.

Meet PVCase: A 3D Solar Design Software That Every PV Designer Should Consider