Much More Renewable Energy Could Be Integrated Into US Grid

I think most of us know by now that there’s enough renewable energy potential to power the world several times over. However, the key is matching what can be generated in a specific location with what is needed in that location (with the “location” generally being a relatively large region). Naturally, many homes can generate all the power they need from rooftop solar panels. However, many cannot — about 75% is the figure I’ve read. Think of all the (highly land- and energy-efficient) apartment buildings, tree-covered roofs, etc. that cannot generate enough electricity from rooftop solar panels. Then, there are also energy-intensive businesses, and there’s also the simple fact that the sun does goes down every day, while our electricity needs go on.

So, the question arises, how much can renewables such as wind and solar really cover our electricity needs? Well, according to a new report by Synapse Energy Economics (prepared for the Civil Society Institute), with heavy reliance on renewables, “regional electricity generation supply could meet or exceed demand in 99.4 percent of hours, with load being met without imports from other regions and without turning to reserve storage,” by 2050. 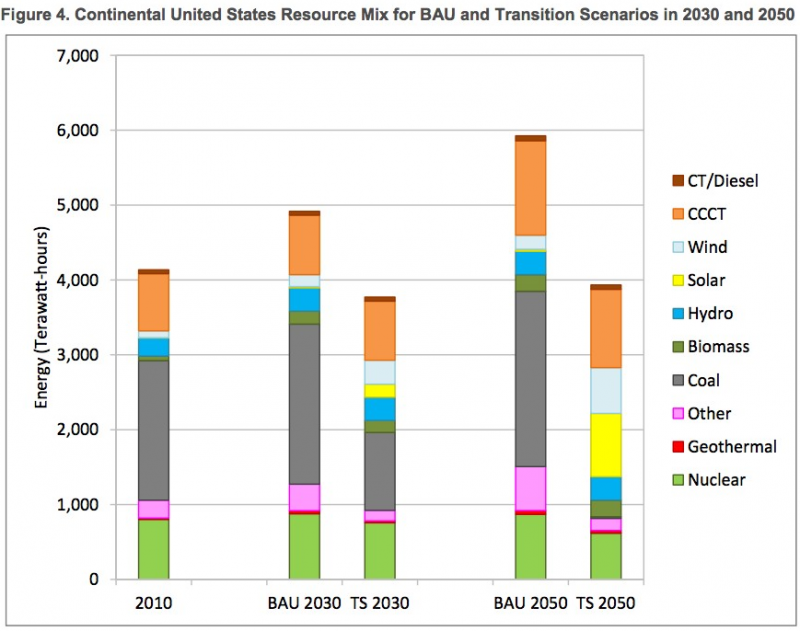 The report doesn’t specifically indicate how much of the grid would be supplied by renewables. The chart above is the best you get for that. However, I’m actually happy about that, because a focus on one dubious number would take emphasis away from the fact that this scenario is far from perfect and overly pessimistic (see below) but still finds that we could have a ton more renewable energy integrated into our grid.

The full report is available online. But some more key points are as follows:

Grant Smith, senior energy analyst at the Civil Society Institute, said: “This study shows that the U.S. electricity grid could integrate and balance many times the current level of renewables with no additional reliability issues. Recent improvements in both renewable technologies themselves and in the technologies that are used to control and balance the grid have been proceeding at a rapid pace, and the incentives and rewards for success in this area continue to drive substantial progress. In contrast, the alternative—continuing to rely on increasing combustion of fossil fuels to generate electricity, and producing ever-increasing levels of greenhouse gases—is far less feasible, and presents much more daunting technical, economic, and social challenges to human and environmental welfare. In comparison, the challenge of integrating increasing levels of solar and wind power on the U.S. power grids requires only incremental improvements in technology and operational practices.”

Report co-author Dr. Thomas Vitolo, and analyst at Synapse Energy Economics, Inc, added: “Put simply, the message today is this: It is a myth to say that the United States cannot rely on renewables for the bulk of its electricity generation. This study finds that the projected mixes, based entirely on existing technology and operational practices, are capable of balancing projected load in 2030 and 2050 for each region—in nearly every hour of every season of the year.”

As noted above, this was not a general look at electricity needs and potential. On the contrary, it was a very close look at specific needs and potential in 10 regions. And it didn’t just do so for peak load, but for every hour of every season of the year. Here are some sample graphs: 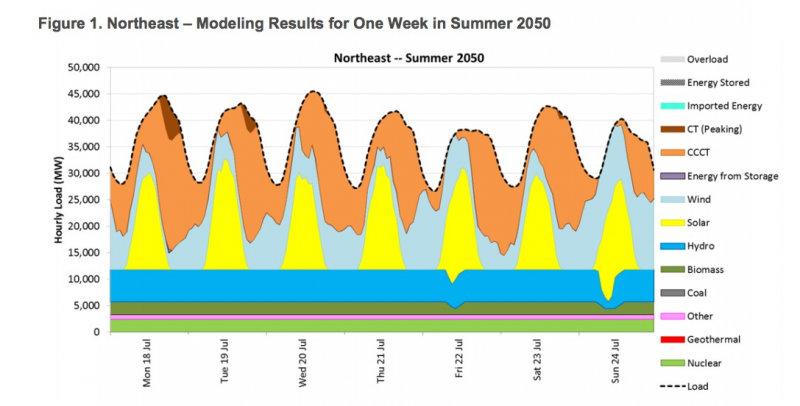 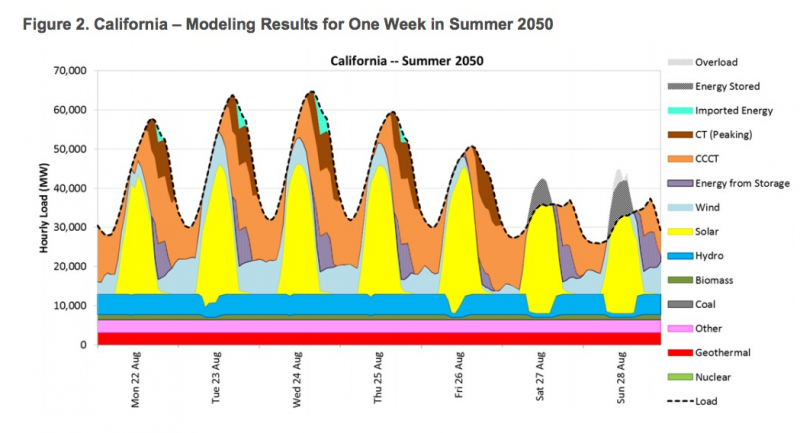 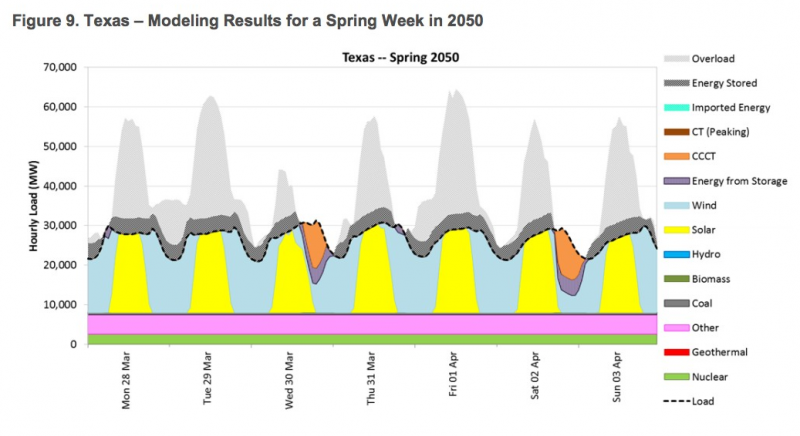 There are several additional regional graphs like those above in the report — they are very interesting to look at, so I’d recommend checking out the full report.

For now, I’m going to repost some select quotes that I think are really worth paying attention to.

The key point of the study is that, even using technology available today, we could have much higher integration of renewables in the grid. Here’s a key quote on that:

“Our findings are consistent with other studies, such as MIT 2012, which suggest that much of the U.S. grid could integrate and balance many times the current level of renewables with no additional reliability issues. Recent improvements in both renewable technologies themselves and in the technologies that are used to control and balance the grid have been proceeding at a rapid pace, and the incentives and rewards for success in this area continue to drive substantial progress. In contrast, the alternative—continuing to rely on increasing combustion of fossil fuels to generate electricity, and producing ever-increasing levels of greenhouse gases—is far less feasible, and presents much more daunting technical, economic, and social challenges to human and environmental welfare. In comparison, the challenge of integrating increasing levels of solar and wind power on the U.S. power grids requires only incremental improvements in technology and operational practices.”

As noted above, energy storage (as well as solar and other renewables, for that matter) is likely to advance tremendously in the coming years, making this report overly pessimistic about what’s possible and even likely to happen. Here’s a good quote on that topic from the report itself:

“Energy Storage exists today in the forms of pumped hydropower, compressed air storage, flywheels, and batteries. Thermal energy storage in buildings and industrial settings is also used today. Storage provides the ability to both absorb electricity during hours of surplus and to dispatch it as a generator at a later time. Energy storage will always involve some level of losses—for example, it takes more energy to fill a pumped hydro storage reservoir than can be recovered by releasing the water. Today’s advanced storage technologies, such as batteries and flywheels, are relatively expensive and limited in scale, and have thus been applied mostly for specialty applications. However, lower-cost energy storage is an area of very active research and development, including efforts to improve batteries, develop hydrogen production and storage, and implement end-use storage such as thermal storage in buildings, electric water heaters that can respond to system operator controls, and plug-in electric vehicles. Energy storage will almost certainly play an important role in any energy future with higher levels of renewable resources, because storage effectively converts intermittent energy generation to highly flexible dispatchable generation. This study assumed that future storage would have the same cost and efficiency structure as current storage; however, technological advancements will only improve the cost and performance of electrical storage over time.”

Also, from the press release, here’s a little bit more on the research methodology for those interested in digging in a little bit further:

Synapse developed a spreadsheet-based hourly dispatch model to test the capability of the Transition Scenario resource mix in each study region to meet hourly demand in that region.Hourly load data for each region was based on 2010 actual demand, and was adjusted — considering changes in demographics, wealth, and energy efficiency—so that the peak load and annual energy requirements closely matched those in the 2011 Transition Scenario. Data for these tasks were obtained from FERC 2011, NERC 2012, and U.S. EPA 2011. The generators used in the model came from the BBAU 2011 Transition Scenario.

This looks like a very useful study with very exciting findings (even if they are very similar findings to what other studies have found). Your thoughts?