Rooftop solar is a great idea because it turns unproductive space into renewable energy. But tall buildings often have more wall space that could be used to make electricity than roof space. Hanging solar panels on walls is possible but often the resulting look is not what building owners have in mind. Working together, photovoltaic manufacturer SCHMID and the Fraunhofer Institute for Solar Energy have come up with new production techniques that permit the manufacture of a wide assortment of building integrated solar products that are attractive to the eye at a significantly lower cost. Known as the BIPV-Fab project, the research is funded in part by the German Federal Ministry for Economic Affairs and Energy. 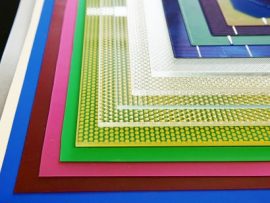 According to Renewable Energy Magazine, the partners have constructed two new assembly lines that can build specialized PV modules in a variety of shapes, styles, and colors. Glass of differing thickness can be accommodated, as well as various encapsulation materials and arrangements of solar cells. They can also be quickly reconfigured to produce different modules as required. Most importantly, the new lines reduce the cost of building integrated components by up to 35% — another incremental gain that moves the adoption of renewable energy forward another step.

“Our results showed that the combination of series production and freedom of design do not comprise each other,” says Stefan Sellner, project head at SCHMID. “We also demonstrated that we can reduce the costs by an average of 35% compared to conventional manufacturing processes of BIPV modules. A flexible, yet cost competitive, BIPV production that also accommodates the various needs of architects, module producers and system integrators at the same time is now possible.”

There are far more square feet of exterior walls on buildings in the world’s cities than there are square feet of rooftops. Reducing the cost of building integrated solar modules will allow architects to design attractive building facades that can help cities capture more electricity from the sun.