An innovative new wireless communications device that uses solar cells to not only power itself, but to also act as the receiver of data transmitted by light, could herald a revolution in the quest to bring access to the internet to remote regions. 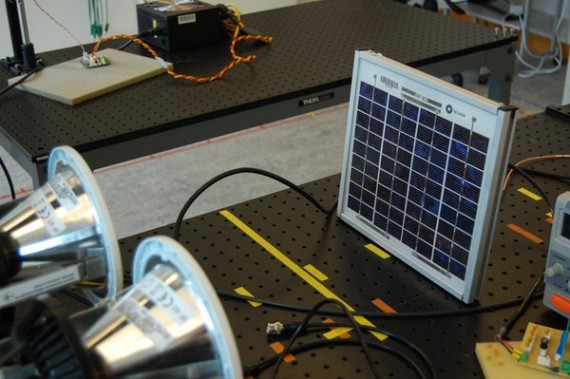 “Light is used to transmit data, whilst the solar panel receives high speed data, which, effectively, gives the solar panel the means to provide energy for Li-Fi technology AND act as a broadband receiver for Li-Fi!”

The new solar ‘Li-Fi‘ solution, which was developed by a research team led by Professor Harald Haas at the University of Edinburgh’s Li-Fi R&D Centre, was introduced at a recent TED Global 2015 event, where Haas “demonstrated how Li-Fi can be used with solar cells to receive data.”

“What if we could use existing technologies to provide Internet access to the more than 4 billion people living in places where the infrastructure can’t support it? Using off-the-shelf LEDs and solar cells, Harald Haas and his team have pioneered a new technology that transmits data using light, and it may just be the key to bridging the digital divide.”

This prototype setup, with the solar cells providing both the electricity and acting as broadband receivers, could be a huge boon to people in those areas where building the necessary infrastructure, both energy- and communications-wise, to support internet and data communications access isn’t going to happen anytime in the near future. According to Edinburgh Research and Innovation (ERI), these self-powered communication nodes “will remove a major barrier to data communication growth.”

“This University of Edinburgh technology combines light based data communications, or ‘Li-Fi’, with energy harvesting, to create an exciting set of applications not previously anticipated including in rural broadband access, smart city networks, and the internet of things. The wider opportunity is to transform global communications by speeding up the process of bringing internet and other data communication functionality to remote and poorer regions in a way not previously thought achievable due to lack of infrastructure and investment.” – Tom Higgison, ERI’s IP Projects Manager

Why We Install: SolarCity Highlights Solar Jobs From A Veteran’s Point Of View